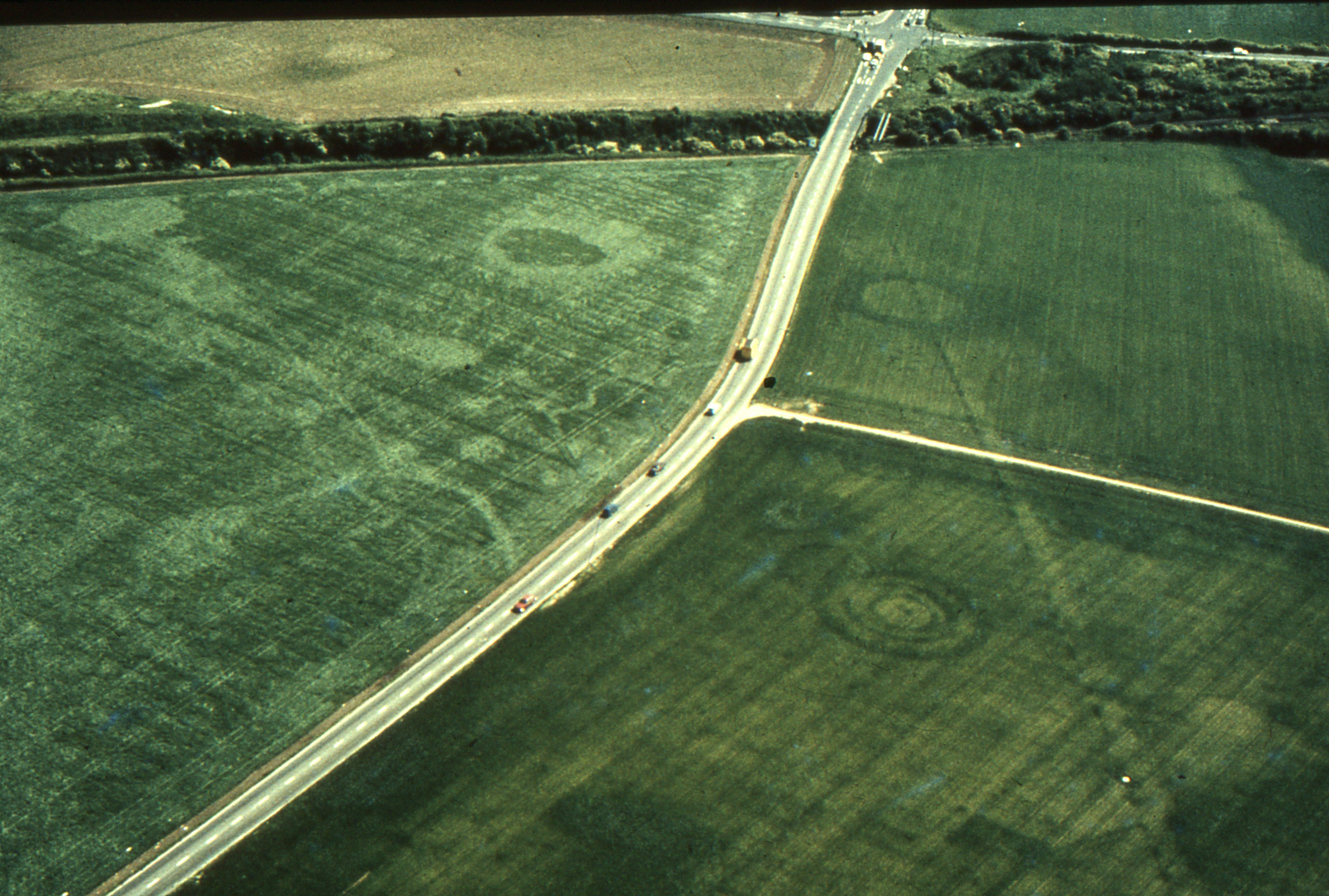 Today’s image for Day 264 of the VM_365 project shows an aerial photograph of one of the most impressive groups of crop mark groups in Thanet’s historic landscape. The picture was taken in the the late 1970’s, from an aeroplane flying over the downland ridge at Lord of the Manor, Ramsgate overlooking Pegwell Bay.

In the photograph, which is facing south east toward Ramsgate, a chalk ridge extends from the lower right corner of the picture toward the top left. The ridge is isolated by the dry valleys that flank it on the right and left hand sides, affording spectacular views over the coastline to the south .

The overflight to photograph the cropmarks took place before several major developments in the road network in the immediate area took place, preserving a record of the  landscape despite the considerable changes  that have happened in recent years. The linear markings and circular shapes that can be seen through the variations in the colour of the crops growing in the field, indicate the locations of buried archaeological features and sites, which have been investigated in many phases of archaeological investigations that were guided by the location of the crop marks since the photograph was taken. The effect of buried archaeological sites  which produced the variations in colour in the growing crop was explained in a drawing produced by Dave Perkins in our VM_365 post for Day 252.

At the junction between a road and a railway cutting that can be seen at the top right of the picture, one of the earliest published archaeological investigations was conducted by William Rolfe, Thomas Wright and Charles Roach Smith, when an Anglo-Saxon cemetery was disturbed by the railway cutting in 1846.  A drawing made of one of the graves was shown on VM_365 Day 225. The Saxon cemetery and the more ancient Bronze Age ring ditches that had occupied the ridge, continued to be investigated in several stages in the later 20th century.  Images of some of the excavations of the Anglo-Saxon cemetery that were carried out in the 1980’s were shown in the VM_365 posts for Day 216 and Day 217.

The three concentric ring ditches of a multi-phase monument, which was first constructed in the Neolithic period and was renewed in the Beaker and Bronze Age periods, can be seen in the bottom right part of the image. A view of the partial excavation of the three ring ditches in 1976 was shown in the image for Day_21.

Archaeological work in this landscape has continued to be carried out with the ditches of an Iron Age settlement being explored in 2012 and in a  training excavation carried out as recently at 2013.