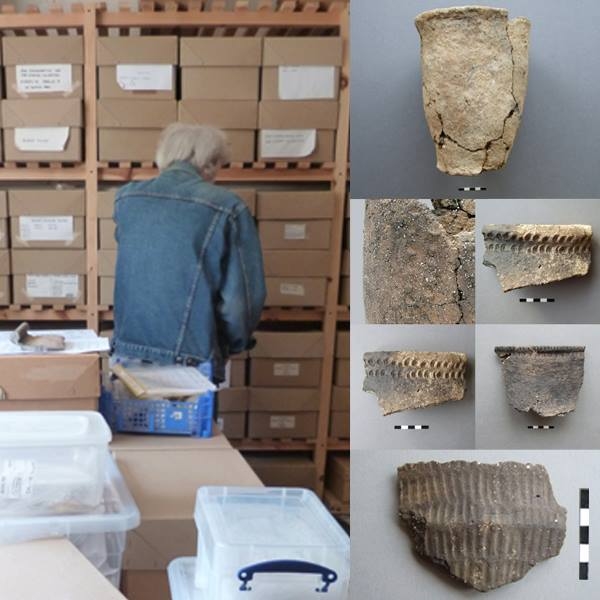 Today’s image is another in our series of roundups of posts contributed by our guest curators. This time we are looking at the posts Nigel Macpherson Grant contributed, mainly about prehistoric ceramics. Many of our posts have been based on his extensive knowledge and the detail published in reports and so much material in the VM_365 is based on his work.

A report from an archaeological specialist could appear to be a dry prospect for the average reader, but Nigel’s are always filled with nuggets of information about the potters art or the patterns in form, fabrics and techniques current at any time which make for interesting posts for the VM project. On the left hand side of the picture is Nigel himself, who appeared in Day 2 of the VM 365 project, sorting through boxes in our store for more pottery examples.

On the right of the picture are several examples of the pottery pictures Nigel produced for us, always with an interesting story to tell about how they were made or how they might have been used. The first at the top was a previously unreported Bronze Age Urn which featured on Day 212 of the VM_365 project, the middle image that featured on Day 155, showed how ceramics were influenced by other materials, in this case the stitching on leather containers and the third image from Day 172, shows a finely decorated Neolithic bowl from Ramsgate.

Archaeology depends on the dedication of people who make the detailed study of a single type of artefact their life’s work and the contribution of our friend Nigel to Thanet’s archaeology is immeasurable and continues to grow.

Links to Nigel Macpherson Grant’s contributions to the VM_365 Project: