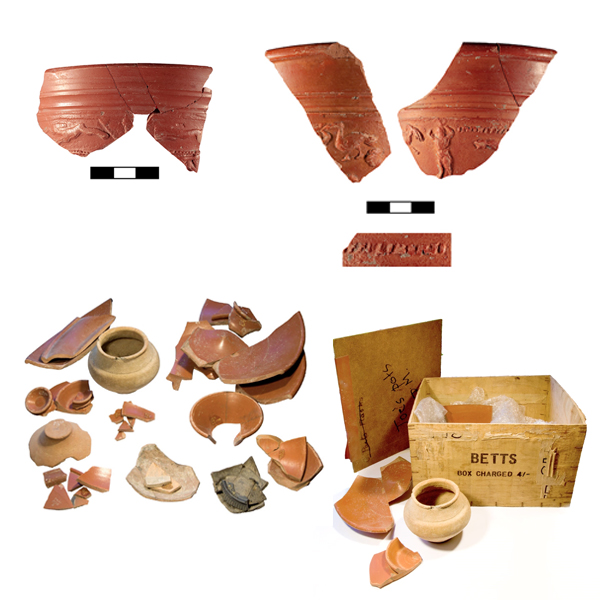 For Day 362 of the VM_365 project we have a roundup of the images that accompanied posts made by one of VM_365’s guest curators, Dr. Steve Willis of the University of Kent, an expert of the distinctive Roman samian pottery which has been found on so many of the archaeological sites of Roman Thanet.

Samian vessels featured in several  VM_365 posts. Day 297 featured samian sherds from a site at Dumpton near Broadstairs and Day 102 featured a small samian cup from the remains of a kitchen found at a Roman site in Broadstairs. Day 183 featured a samian sherd  with evidence for a repair from the same site and Day 54 featured a sherd of samian with a name scratched on the surface.

With an expert’s eye and detailed knowledge the assemblages of finds collected by archaeologists can reveal hidden details, even from the smallest elements and Steve’s knowledge of Roman pottery has helped to provide detailed information for a number of VM_365 posts.

One of the most extensively excavated of the major buildings of the Roman period in Thanet is the large Villa at Minster, which appeared in several VM_365 posts. In VM_365 posts  two samian beakers of the rare Dechelette 64 form,  found in the Minster villa excavation, were examined by Dr. Willis. Day 175 of the VM_365 project featured a beaker manufactured in the workshop of Libertus, who was producing pottery at Lezoux in the early 2nd century. The beaker on Day 179 was slightly later, and is decorated with a chase scene. The post also featured an interesting biography of the French archaeologist Joseph Déchelette who first catalogued the samian vessels manufactured in Gaul.

On Day 86 of VM_365 the post visited a box full of samian and other Roman pottery, which belongs to an archive of finds and records which has been given to the Trust to store. Steve was able to examine the pottery contained in the box and to give more detail on the forms and dating of the pottery in a later post on Day 345. in a strange co-incidence, the post written by Steve for Day 346 pointed out that one of the vessels that formed the contents of the wooden storage crate was manufactured in the same place, near Colchester in Essex, nearly two thousand years later. The parallel was drawn that the transport of goods a very useful form of evidence for archaeologists!

The images that went to make up this round up picture were produced by Lloyd Bosworth, archaeological technician at the University of Kent.