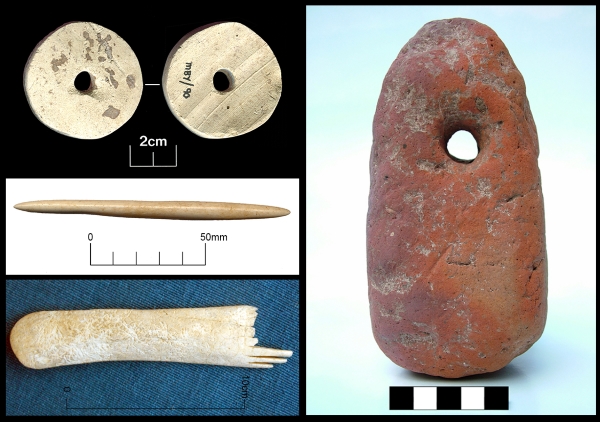 As we have reached the final few days of our VM_365 posts we thought that it would be rather fun to introduce us to you as the Curators of VM_365 using either our favourite images or a summary of the posts that we contributed over the project. Our Curator today is me, Emma.

Today’s image for Day 361 features my favourite four images that we posted for the project. One of my hobbies outside of archaeology is sewing, particularly dressmaking (although do not ask me to take up your trousers or sew on a button which I loathe!). So, it would seem natural that my favourite four images are all implements dating from the Iron Age to the Anglo Saxon period that are associated with the production of cloth.

The manufacture of cloth is a process that is largely alien to most people whether they are interested in sewing or not. Cloth, be it natural or man made is delivered to us in bolts of pre woven fabric from which we can choose our fibre, weight and pattern preferences, we can buy it on the internet, by mail order and in shops. Personally manufacturing our own cloth is a practise long forgotten and these artefacts represent the processes involved when producing your own cloth was a necessity.

The artefact on the top left is a Roman spindle whorl which previously featured on Day 276 of the VM_365 project. This example was recycled from a sherd of 1st century flagon and would have been used to turn the raw product from fleece into yarn. The Spindle whorl was wedged onto a spindle which was suspended upright from the fibres to be turned into yarn. The spindle was set spinning and the twist travelled along the length of the fibres spinning it into yarn.

The artefact shown top right is an iron Age loom weight which previously featured on Day 115 of the VM_365 project. This example would have been used in a  simple warp weighted loom designed to stand against the wall. The loom weights would have been tied to the bottom of the warp (vertical) threads to add tension whilst the cloth was being woven.

The weaving comb shown in the bottom left of the image above is of late Iron Age date and would have been used to push threads into place during weaving. This example featured on Day 110 of the VM_365 project and it is unclear if it had actually been used as the decoration is unfinished and some of the tines are broken.

Pin beaters were used to beat down threads while using a warp weighted loom and the artefact shown middle left is a Middle Saxon bone double ended pin beater which previously featured on Day 144 of VM_365 project. The pin beater has been slightly flattened and polished smooth through frequent use. This artefact is my overall favourite, it is a simple object that has seen heavy use and would most likely have been a treasured tool worn over time to fit the hand of the person using it.