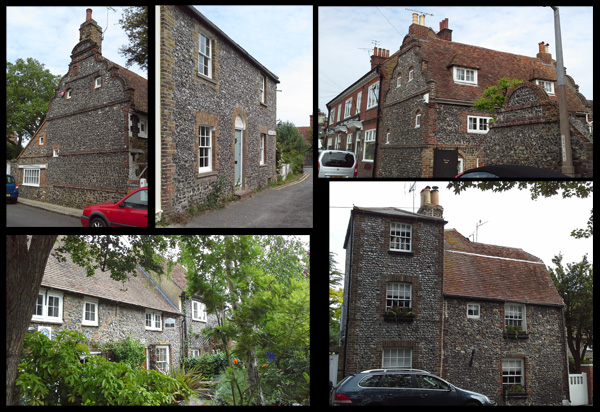 Today’s image for Day 360 of the VM_365 project shows a series of images of another of our Hidden Hamlets in the Our Thanet series this time from Reading Street, Broadstairs.

The hamlet of Reading Street is located on the north side of Broadstairs. The earliest buildings, most of which are located along the main road through the hamlet also known as Reading Street, date from the early 18th century although the hamlet may have had earlier origins; nearby on Elmwood Avenue, east of the main focus of the settlement, is Elmwood Farmhouse, part of which is a 16th century timber framed building.

White Swan cottage (top left) is an early 18th century house set end on to the road and is built of flint with curved Flemish gable ends edged in brick. Further along Reading Street is a second early 18th century Flemish gabled house, Rozine Cottage (top right). At the eastern end of Reading Street there is also a row of cottages built in a similar style with curved gabled ends which were constructed in 1901.

At the western end of Reading Street is a group of cottages dating to the early 18th century (bottom left). One of these cottages, Joss Cottage, is where the legendary local smuggler Joss Snelling is reported to have lived. The end wall of Corner Cottage which faces on to Astor Road is particularly interesting as it features a number of blocked window openings. At the western end of the group is a particularly striking cottage with a three storey, early to mid-19th century component built of flint with stock brick dressings (bottom right).

Trinity Square is a little side road leading from Reading Street which contains an interesting mix of small 19th and 20th century houses and cottages in both flint and brick. Trinity Cottage on the corner of Reading Street, (top middle) is a pretty example of a 19th century cottage faced in flint with stock brick dressings.

Reading Street has plenty of other interesting buildings that have not been featured here including Elmwood, which was the home of Cecil Harmsworth, the famous newspaper proprietor who later became Lord Northcliffe and was Propaganda Minister during the first World War.