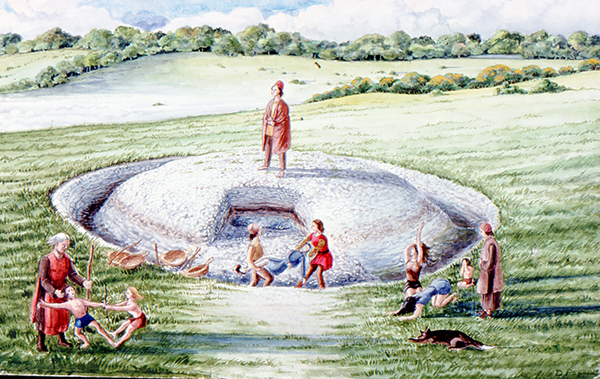 The image for today’s post on Day 265 of the VM_365 project is an illustration by the Trust’s first Director David Perkins, inspired, as much of his work was,  by the landscape and prehistoric archaeology of Lord of the Manor Ramsgate.

The archaeological excavations that were carried out to explore the many features that were revealed by aerial photography in the area near Lord of the Manor were very significant to understanding the scale of prehistoric settlement in Thanet.

Using their experience of digging several of the major sites  revealed in the Landscape, both Dave Perkins and Len Jay used their artistic skills to record their activities and to interpret the sites they  were uncovering.

The coloured drawing  by Dave Perkins recreates a scene associated with the insertion of a new burial into the mound of one of the prehistoric round barrows located at the crest of the hill, an event that was attested in the archaeological record.

The stark white of the chalk that lies  at a shallow depth below the soil are visible in the cut of the ring ditch and the central mound where it was cast over a primary burial located at the centre. Baskets and shovels show that the ditch has been newly cleaned to refresh the surface of the chalk. The scene shows the mound as having been partly removed, so that another burial can be inserted within the circuit of the ditch. The later burial is perhaps that of a member of family who wishes to be close to a relative, or perhaps a clan member who wants to remind his followers of the source of his power. The burial may be of an unrelated individual who want to claim a connection with the glories of a bygone age. Grieving family members, along with warriors and perhaps elders of the clan are shown outside the ring ditch, while the person to be buried is carried across the ditch to the new grave.

Although the drawing reflects  the archaeological facts that were established from the sequence recovered from the ground, the truth of the scene’s representation of Bronze Age culture can never be known as there are no records to guide our interpretation with certainty.