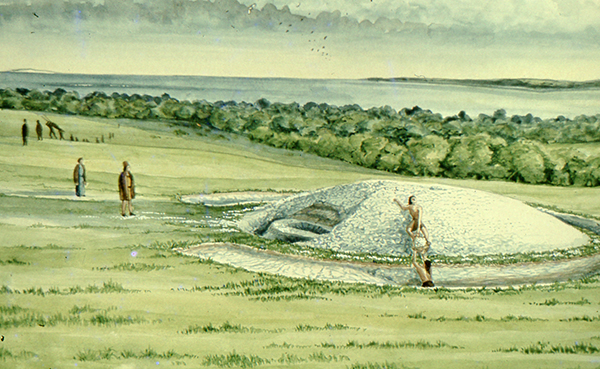 The image for Day 266 of the VM_365 project is the second in a series of images drawn by Dave Perkins, reconstructing the sequence of event associated with a funerary monument that was revealed in excavations at Lord of the Manor, Ramsgate.

In today’s image, the single ring ditch and mound that was shown in yesterday’s picture is being renewed, ready to receive another burial. The original ring ditch and its mound, now compressed and discoloured, have been sealed under fresh chalk which is being dug from a new ring ditch with a greater diameter than the earlier one. The circuit of the new ditch is  interrupted by a causeway, where a stretch of the circuit was not excavated. It is a process like this that created the concentric circuits of ditches that show up so well in the cropmark posted on VM_365 Day 264.

The location of the barrow is closely based on the landscape of the Lord of The Manor site, with the land falling away into a deep dry valley, which is shown covered with woodland. The sweep of the valley leads to the sea at Pegwell Bay in the upper right hand side of the picture. On the left side of the image a funeral procession is making its way up the side of the valley toward the newly refurbished barrow.

It is still possible in the present day to stand near the site of the barrow and see the same view over the bay which would have been presented to the prehistoric people of the area.  It was this experience of the landscape that Dave Perkins used to draw his reconstruction images.

Further analysis of the landscape has shown that there are only a few sites in Thanet’s landscape where such an uninterrupted view is possible and it becomes clear from considering the landscape that sites were carefully chosen to provide such a panoramic view. Excavations have shown that some were used over many thousands of years to locate settlements, gather for ceremonies and to create structures where the dead could be buried.

Once again we can reconstruct the facts that are presented by the archaeological features on the ground, but can never really confirm the reasoning behind the choice of location which is so well captured in the drawing. Was it to assert a power or domination over the landscape or to enhance the visibility of the monument from other sites? Motives may have changed over time passing from willful choice into tradition whose meanings were lost in the passage of time.

The true motives are lost without the record of contemporary voices, but we can explore possible meanings through attempts at reconstruction like the drawings in this series of posts. There are questions to ask about this reconstruction: was the natural environment so open and free of the influence of man as it is shown? Was it as simple a task to create a barrow as is suggested? The ring ditches of the many barrows that have now been excavated in Thanet have demonstrated that they are often perfectly circular with regular and symmetrical profiles throughout the circuit, despite the hard chalk rock that had to be cut to create them. It is immediately possible to suggest the picture could be made more accurate with the addition of some figures carrying out some quite complex surveying and architectural control over the cutting of the ditch as well as an indication of the greater amount of labour that went into cutting away the chalk in such quantity. Our ideas progress through such criticisms of the reconstruction, which perhaps leads in the future to new images that take new ideas on board. Sadly they will not have the benefit of Dave Perkins’ wisdom and experience to inform them.