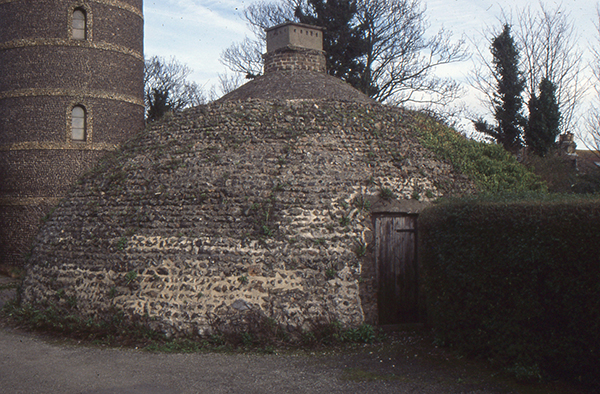 Today’s post for  VM_365  Day 263 shows the disused reservoir located next to Crampton Tower, Broadstairs which was featured in yesterday’s VM_365 post.

The reservoir formed part of the Broadstairs waterworks built by Thomas Crampton in 1859.  Water was drawn from a deep well sunk into the chalk and was stored in the large reservoir covered by this impressive flint and mortar dome. The reservoir had a capacity of 380000 litres and water was pumped by a gas operated engine to a storage tank at the top of Crampton Tower, where gravity created enough water pressure to supply houses nearby.

The dome of the reservoir measures 8.8 metres (29 ft) in diameter and 5.4 metres (18 ft) high. It is constructed of brick inside and flint and daub on the outside of the dome although the upper part is constructed of brick with a chimney. On top of the chimney is a square ventilation box. Like Crampton’s Tower, the reservoir is Grade II listed and together they form a landmark in Thanet’s urban engineering heritage.