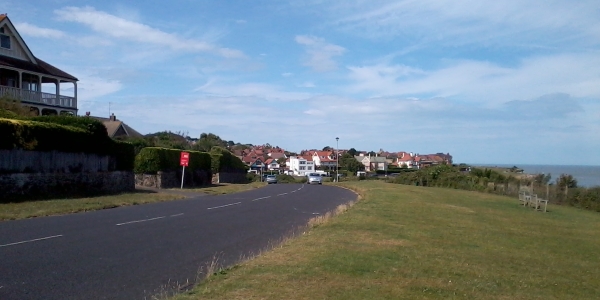 Today’s image for Day 357 is another one in the Our Thanet thread for VM_365. The overview of Dumpton Gap is taken from near the entrance to Seacroft Road, which is on the extreme left of the image. The view faces north across the bay where the deep valley meets the sea at the high chalk cliffs on the right side of the image.

Only as far back as the late 19th century this landscape was open downland, but at the beginning of the 20th century, the benevolent seaside landscape attracted several large convalescent homes, which were served by new roads that were laid out on the cliff top esplanade. A view similar to the one in today’s image was published in a 1907 sale catalogue for plots in the area, posted on Day 41 of the VM_365 project.

In the process of creating the framework of the dense suburb that now covers the valley, many significant archaeological discoveries were made. The earliest of these were recorded by Howard Hurd, one of Thanet’s heritage pioneers,  who as Borough Surveyor for Broadstairs and St. Peters laid out much of the road network which can be seen in the catalogue photograph.

On the slopes of the far side of the valley, on the horizon just left of the centre of the image is Valletta House, now Bradstow School, where Howard Hurd excavated and published a Bronze Age round Barrow and Anglo-Saxon cemetery. The site went on to be explored in several excavations as the gardens surrounding the house were developed over the next century revealing more Neolithic, Bronze Age and Iron Age features, as well as a further burial from the Anglo-Saxon cemetery.

On the far left side of the image, an extensive Iron Age settlement located on the southern side of the valley which later became the site of a Roman building,  was discovered by Howard Hurd in the early 20th century. A bone weaving comb from the site was published on Day 110 of the VM_365 project.

The site was explored further  in several excavations from the 1960’s to the 21st century when the development of suburban roads and closes with characteristic bungalows and semi-detached houses, were explored by Joe Coy, another important heritage pioneer. Pottery of Iron Age and Roman date from these excavations featured in several previous VM_365 posts.

The landscape shown in today’s post is perhaps one of the richest sources of archaeological information in Kent, but is little known in the wider archaeological community because of the limited circulation of the publications of the excavations and the lack of any recent attempt to bring all the sites together and reconsider their significance. Perhaps this overview for the VM_365 project will serve as a start in that process.