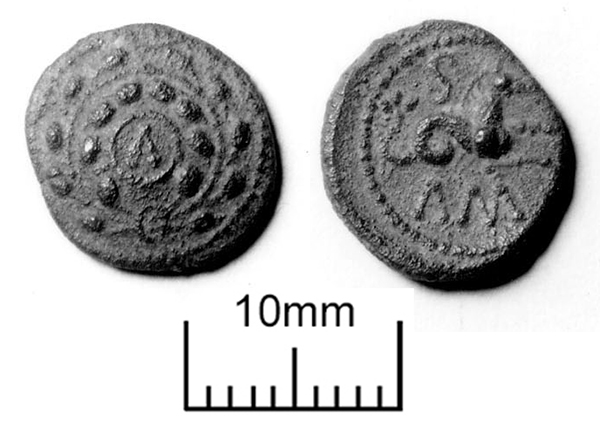 The image today for Day 274 of the VM_365 project is of an Iron Age coin (a Van Arsdell Type 194), issued by Amminus, who was possibly also known as Adminius. Becoming King of the Kent’s Cantiaci tribe in the early to middle of the 1st century A.D., Amminus was thought to have had strong pro-Roman sympathies. Amminus was a son of Cunobeline, a King of the Catuvellauni in the early part of the 1st century. A gold stater minted by Cunobeline and found at St Nicholas at Wade featured in the VM_365 post for Day 272.

The coin in today’s image was found at North Foreland, on the eastern tip of the Isle of Thanet, where a large Iron Age settlement dating from the mid to Late Pre-Roman Iron Age occupied the crest of a chalk ridge overlooking the sea and an important shipping route to the mouth of the Thames estuary.

The coin links the location and its contemporary archaeology to the murky intrigue that eventually culminated in the full scale invasion of Britain by the Roman Empire. The limited contemporary evidence that is available from the distribution of coins of Amminus/Adminus is supplemented by a text reference in the biography of the Emperor Caligula produced by Roman historian Suetonius.

Seutonius claimed that Caligula had exaggerated the banishment of Amminus/Adminius and a group of followers for unknown reasons, into a grand announcement in the Senate  that the Emperor had secured victory over the whole Island of Britain.  Amminus may have also played a part in Caligula’s military posturing, which culminated in an abortive invasion of Britain. It has also been suggested that Amminus returned to Britain with the Emperor Claudius as an advisor and possible later as a Governor.

The coin issued by Amminus links the archaeology of the North Foreland, one of the major coastal Iron Age settlements in Kent, to the power struggles between the British tribal leaders and the growing Roman Empire which must have played a part in the defence of the Island against the Roman invasion fleet.