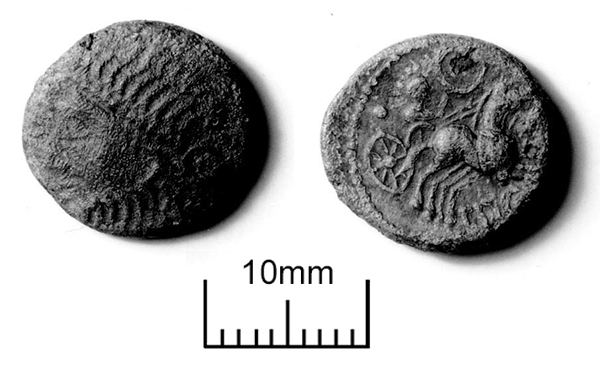 The image for Day 273 of the VM_365 project is of another coin dating to the Iron Age, a struck Bronze of a Late Iron Age King called Eppillus, which was found at Minster on the southern side of the Isle of Thanet .

The biography of Eppillus is largely based on the evidence, using the tiny scraps of written evidence derived from the inscriptions on coins. Eppillus became king of the Cantiaci, the tribe that lived in Kent, around 15 A.D. , possibly after he was deposed or replaced as King of the Atrebates by his brother Verica.

The powerbase of the  Atrebates was in the region around Chichester, which was known to them as Noviomagus. The Atrebates began a political relationship with the Roman Empire as its influence expanded on the continent. Coins of Eppillus issued from Noviomagus were marked Rex, indicating that the King’s power had been recognised by the Roman state.

Like many of the coins issued by Late Iron Age regional rulers in Kent, the example shown in the image today (Type: Van Arsdell 178) is based on a coin issued by Phillip of Macedon, the father of Alexander the Great. Although the images on the coins went through many incremental distortions and abstractions, the bust and chariot on either side of the coin can be traced through their evolutionary changes to their ancient Greek origins. The imagery reflects the independent connection of the Iron Age states with the classical Greek world.

Coins struck by the pre-Roman Kings of Kent provide material and written evidence that was independent of the control of the Roman state, although its influence on the iconography and texts can be detected in the years before the Empire expanded to Britain.

As our extended written evidence of pre-Roman Britain comes almost wholly from writers who lived in the dominant culture, the study of the Late Iron Age coin series allows us to perceive, however dimly, an alternative point of view to the Romans. The scatter of Iron Age coins, pottery and other artefacts from Minster in Thanet provide an indication of what came before the almost overwhelming amount of cultural information about the Roman period which is represented by sites like the Villa that was discovered in Minster.