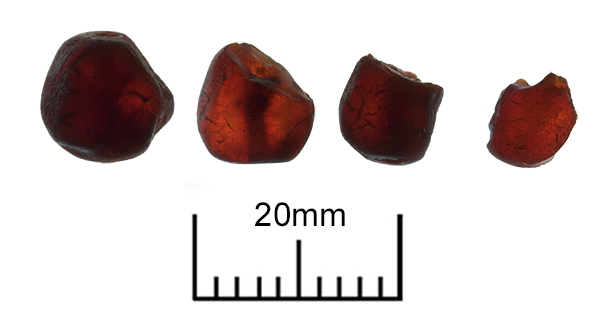 Today’s image for Day 275 of the VM_365 project shows four amber beads found in Grave 32 of the Monkton Anglo Saxon cemetery, part of which, was excavated in 1982.

The 6th century grave, was orientated east west and had been heavily truncated measuring only 0.14 metres deep. It contained only the fragmentary skeletal remains of the long bones of the leg and a single tooth to indicate the presence of the individual who had been buried there.

Amber is fossilised tree resin and Anglo Saxon amber beads are assumed to have been imported from the shores of the Baltic where large deposits are well known. However deposits of amber are also known along the east coast of England and it cannot be assumed that all of the amber beads found in Anglo Saxon graves are from the Baltic shores; they may have been traded down the East Coast of Britain. It is not unknown for pieces of amber to be washed up on the beaches of Thanet.