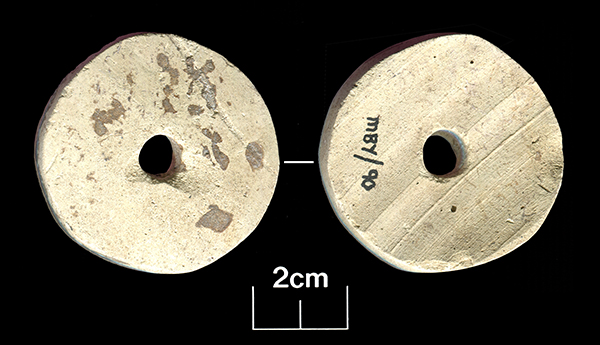 Today’s image for Day 276 of the VM_365 project shows two sides of a ceramic spindle whorl that was found during excavations at Minster, Thanet in 1990.

This Roman spindle whorl  has been recycled from a sherd of a flagon dating to the second half of the 1st century A.D. The pottery sherd has been carefully shaped into a disc and a hole pierced through the centre. The disc is slightly curved, rather than flat, following the  original profile of the flagon. In the picture on the left, marks left from turning the flagon on a potters wheel can clearly be seen as stripes in the fabric.

Other objects associated with weaving including spindle whorls of Iron Age and Late Iron Age/Early Roman date, as well as Iron Age loom weights and an Iron Age weaving comb have previously featured in the VM_365 project