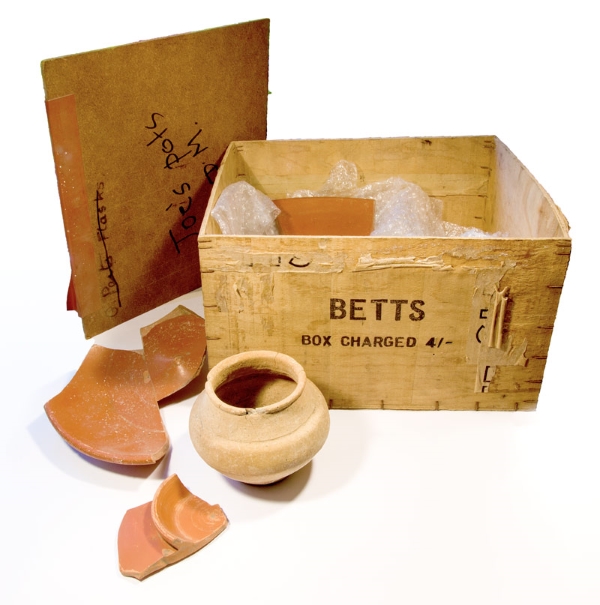 Today’s image for Day 346 shows the wooden box that was used to store some of the Roman pottery excavated at the Roman building near Drapers Mill by Joe Coy in the late 1950’s and 1960’s which featured in yesterday’s VM_365 post for Day 345. The wooden box holding Joe Coy’s Roman pottery dates to the late 1950’s – 1960’s, comtemporary with the time the dig at Drapers Mill was carried out and itself has a story to tell us.

Museum stores house thousands of artefacts and when visiting the stores it is often not long before you see an old tobacco tin, wooden matchbox and the like from the 20th century that had been pressed into service as a make-do receptacle for a find. This was a time when Tupperware, cardboard and plastic wrapping were generally less common and before there were stricter museum curation policies (that specify how materials are to be received by the curating museum). So, just as with a visit to the family shed, you can see how, what were familiar items of recent times, were opportunistically utilized for safe storage.

Coming across such containers can jog the memory and be a fascinating encounter as sometimes what was ubiquitous, valueless and discardable packaging, say 70 years ago, now has a story to tell. Occasionally this is as insightful as the artefact within. In those times we consumed less, things were less easy to replace, and there was more of an attitude of ‘make-do and mend’; what items came in were often carefully designed and very well-made: here was a chance for the prudent 20th century recycler to find a new use for old packaging. What was to hand was helpfully taken into service, not so much to save cash but more likely because there were limited alternatives.

We only have to go back a few decades to the 1960s to be within that time and we can see that Joe Coy’s best pottery finds from the excavations at Drapers Mills from the turn of that decade came to be housed in a robust wooden box convenient for shelving and for transport for when the finds were needed for display or to show the pottery experts.

The box is made of thin ply-wood and its measurements and markings are in imperial standards for it pre-dates the switch to decimalization in 1971. Accordingly it measures 11 by 10 inches and has a height of 6¾ʺ. It had been marked in now fading black-ink by stencilling or stamping with the name ‘BETTS’. It was seen recently by Pete Nash who recognized it immediately as coming from the Betts toothpaste tube factory at Colchester.

Also marked on one side (more obviously by stencilling and in a different type-face) are the contents, described in light traces as ‘TUBES’ with what is likely to be the quantity given but which cannot now be read clearly. The price is given by means of the same stencil as ‘BETTS’ telling the reader ‘BOX CHARGED 4/-’ in what we call nowadays ‘old money’ namely four schillings (20p in today’s decimal currency). The ply-wood is ⅛ of an inch thick, with metal staples used to bind the sheets together. This makes for a container it is very sturdy but light and doubtless the dimensions relate to the size of the tubes inside and their safe transit and housing.

The tubes of toothpaste originally stored in the box were almost certainly of soft metal and shorter than today, so may have sat in two rows within the box. Masking-tape had been added at a later stage, probably to secure an improvised lid as the original top is missing (was that perhaps used in a role as a tray as we might use a shoe box lid today or had it been broken on opening?). Did the original lid say more about the content? A makeshift lid was provided when it was pressed into service to store the pottery, perhaps in the 1960s or 1970s, made of ‘hardboard’ which is another material that was ubiquitous at the time, being used in light carpentry, but now rarely seen. This was also something likely to be simply convenient to hand which has been cut to just lie over the top of the box. It too is inscribed, but this time with summary information on the present contents and in marker pen, short and to the point “Joe’s pots DM.”

Aptly the box and perhaps what it originally held were imports to Thanet, just as it contains imports from the Roman era in its present use. One of these, a whole globular beaker, as featured in yesterday’s post for Day 346 of the VM_365 project, is a type known from Roman Colchester, one that may have been made there, which would be a striking coincidence.

Of course the reuse of former packaging is well-attested through the ages: from Roman wine and oil amphorae seen reused as caskets for burials (with examples known on Thanet and in north-east Kent) to the tea-chests which were an everyday item seen in second use in ‘storage and removal’ through the second half of the 20th century. Doubtless old jam jars will be employed for new home-made jams this summer, some maybe first had jam from Tiptree, near Colchester.

The Betts factory which was still operating in the 1960s closed to be redeveloped recently for housing. Joe Coy’s box has become an artefact and its history ties it in time to the important excavations at Drapers Mills that occurred when the box was itself young. What happened to all the thousands of other boxes of this type dispatched from the Betts factory and are there other surviving examples from Thanet?