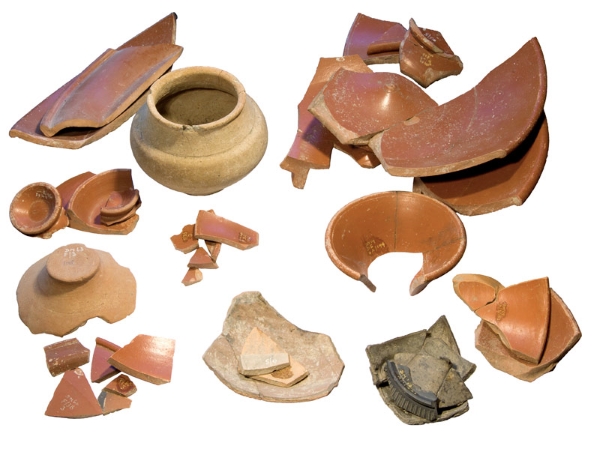 Today’s  image for Day 345 of the VM_365 project shows a selection of pottery from excavations carried out by Joe Coy at Draper’s Mill, Margate during the late 1950’s and early 1960’s. These vessels and sherds were stored in a wooden box and a general exploration of the samian contents have previously featured on Day 86 of the VM_365 project.

A deeper dig into Joe Coy’s box of Roman pottery reveals more about the site and the collection. The ensemble features samian ware very prominently and some is shown in this photo; it is clear that this ‘boxed set’ is a selection of items considered particularly interesting by the excavator.

Samian ware was the fine imported table ware of the Roman period which was relatively expensive and, indeed, rather ‘flashy’ perhaps when set on the Roman dining table alongside other locally produced vessels. Several vessels here have the stamp of their maker present. Leaving aside the three complete or near complete vessels in the foreground of the post from Day 86 there are a number of vessels which are represented by several sherds and in these cases much of the vessel is present. This being so we might speculate: was there an accident one day when several vessels were broken and needed to be discarded?

Two of the larger samian vessels are bowls made at Lezoux in Central Gaul, now located in modern France (top right). From the reading of the names of the makers (or is it the name of the workshop?) impressed into the floor of the vessels, together with their shape, it is possible to say with confidence that they date to the middle of the second century AD. The makers stamps show them to be the work of Paterclinus and Patricius ii. The most frequent vessel form amongst the samian is, however, the conical cup (Dragendorff’s type 33) though this is present in a variety of sizes.

The small whole buff-coloured globular vessel is a beaker (Jason Monaghan’s type 2C6) and is a form seen at other sites in the region such as Colchester. Pots in this form have likewise been recovered at Cooling in north Kent (on the Hoo Peninsula) where there was a major pottery industry at this time.

The samian includes first century ware, while a little later in date is one of the type 33 cups which is a particularly fine example of Hadrianic date and more orange than red (bottom right). Later samian forms occur too. One of these late samian vessels came to the Drapers Mills site from Trier, then in Eastern Gaul, in the early third century and is noteworthy in lacking the finesse of earlier samian wares. Present too in the box are other non-samian Roman finer wares including a sherd from a beaker from the Nene Valley near Peterborough, and the lower part of a vessel with gold mica-dusting giving it an intentionally attractive glittery appearance (on the left but with glitter not caught in this photo).

Another fine table item present is of much more recent date being a decorated base fragment of black Wedgewood Jasperware (bottom, right of centre on top of a small pile of fine Roman greyware sherds) which was perhaps originally thought by the excavators to be fine Roman ware. Samian and Nene Valley beakers were the equivalent to Wedgwood products in their time and Jasperware often featured goddesses and other imagery drawn from the classical world so their companionable boxing-up here seems very apt.