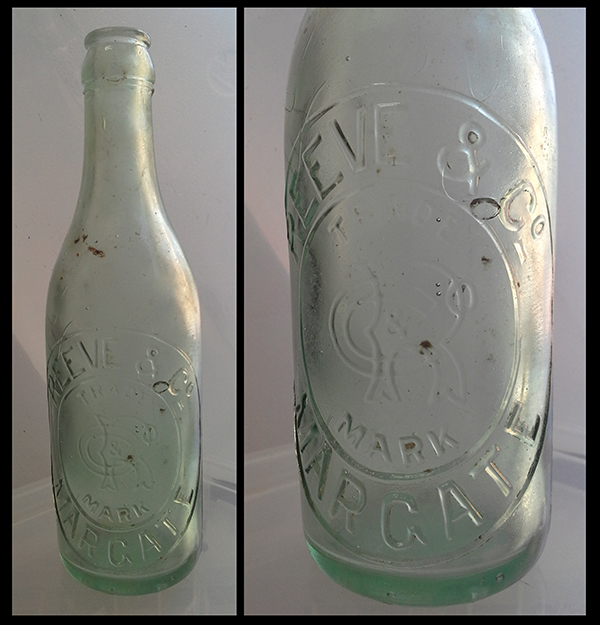 Today’s image for Day 347 of the VM_365 project shows a glass soft drinks bottle from the mineral water manufacturers Reeves & Co Ltd who operated between 1849 and 1964 at Margate. This bottle probably dates from around the late 19th century to the early 1900’s and reads ‘Reeve and Co Margate’ in the outer oval and ‘Trade Mark’ in the inner oval.

The Reeve and Co. Mineral Water factory was established within an enclosed yard at Hawley Street in 1849 where they constructed a purpose built facility to draw spring water from the Dane Stream via a well or a culvert which was then carbonated on site. The carbonated water was a popular beverage among holiday makers at Margate.

In the later 19th century Reeve and Co. engaged in a tremendous variety of trades centred around wholesale trade, processing and distribution and also had a retail shop on Hawley Street, the frontage of which can still be seen pronouncing 70 years in operation which dates the shop front to around 1909.

A lively narrative of the operation of the plant was given in the local newspaper, Keble’s Gazette in January 1889 describing how as many as 120 people were kept employed in a range of processes that required very different skills among the staff from fish gutting to cutting and soldering tin cans for storage. The key to Reeve’s business was the procurement, storage, processing and distribution of commodities. It is clear from the description in Keble’s gazette that the factory bridged a gap between the labour intensive trades of the fisheries and agriculture that supported the rural economy, and the intensive division of labour that represented the new industrial manufacturing processes of the later 19th century. In the final passages of the description it is implied that the factory was also fulfilling a social role in providing a continuity of employment in the towns population whose traditional working patterns were diminishing in importance and who were being driven into poverty.

Reeves and Co. Ltd connected the historic import and export functions of Margate as a sea trading port and the seasonal products of the local agriculture and the fisheries with the increasing demand for food in the growing cities, particularly London. Much as London exported its leisure time to the coast, the coastal and agricultural products were sent back along the trade networks to the city, preserved, bottled and tinned.

With the general decline of Britain’s industrial cities and trading networks in the period after World War Two the type of fetching and carrying business Reeve and Co. were engaged in had to compete with increased international imports and declining demand from the failing industrial towns. The niche markets and local networks were no longer sufficient to support it and the company closed in 1964.