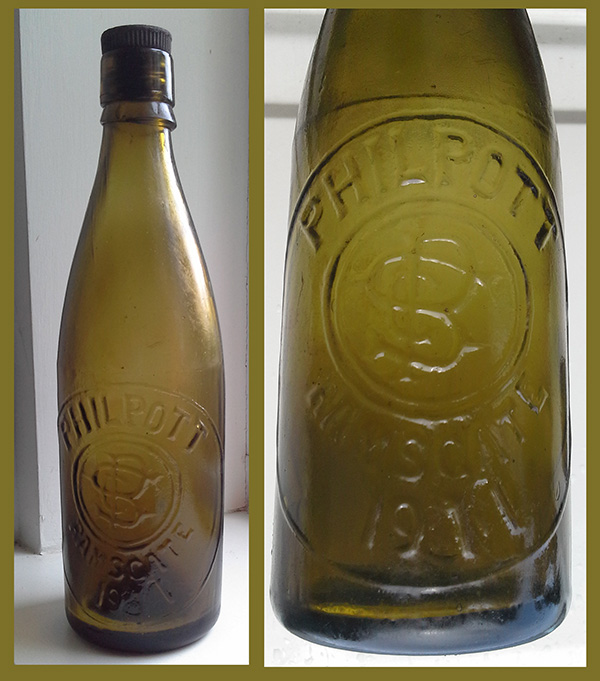 Today’s image for Day 348 of the VM_365 project shows another early 20th century glass soft drink bottle from the Trust’s collection from a local manufacturer.

The bottle is made of olive green glass and was found with its screw cap stopper still intact. The roundel reads ‘Philpott Ramsgate 1911’ with the company logo in the centre.

This bottle was produced for the Philpotts Mineral Water Company who were established in 1850 and operated from 1A Cavendish Street, Ramsgate. Presumably the company drew their water from a draw well, noted on the 19th century 1:500 town map of Ramsgate, and aerated it on site in a similar way to Reeve & Co. Ltd who featured in yesterday’s post for Day 347 of the VM_365 project.

In 1878, Philpotts opened a shop at 16 High Street from which they sold their products.  The census for 1881 indicates that Stephen Philpott, owner of the mineral water company employed 4 men and a boy.  The shop closed in 1905 and the company itself ceased to trade in 1920 when it was taken over by the Ozonic Mineral Water Company, the soft drinks arm of the Tomson and Wotton Brewery.