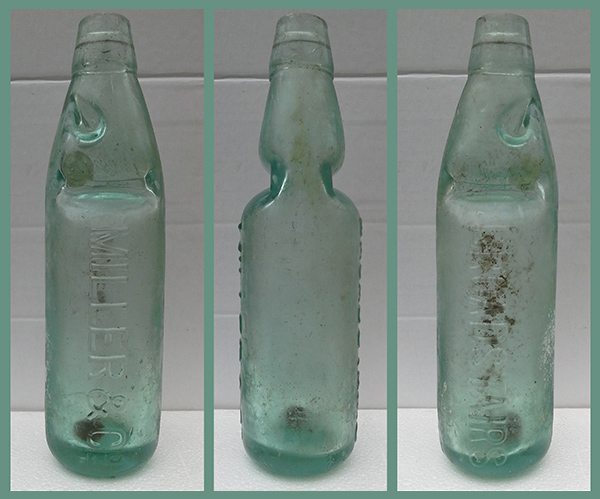 Today’s image for Day 349 of the VM_365 project shows a late Victorian/early 20th century Codd bottle manufactured for a soda water company from Broadstairs. Soft drinks bottles from other companies in Thanet have previously featured on Day 347 – Reeves & Co. Ltd and Day 348 – Philpott’s of the VM_365 project.

Codd-neck bottles were used for carbonated drinks; their unique design patented by Hiram Codd of Camberwell, London in 1872,  included a pinched neck enclosing a glass marble and a rubber washer. The bottles were filled upside down and the pressure of the gas used in the carbonation forced the marble against the rubber washer sealing the gas in. The pinched neck of the bottle incorporated a small chamber for the marble to move into so that it did not obstruct pouring.

This clear glass example is from a company called Miller & Co. ,which is moulded along one side of the bottle, moulded on the other is ‘Broadstairs’.  The glass marble and rubber washer are still intact which is relatively unusual for these bottles as they were often broken by small boys to retrieve the glass marbles! Glass marbles from bottles such as these used to be a frequent chance find on local beaches popular in the late Victorian and early 20th century and were also frequently found in fields used as Victorian rubbish tips.