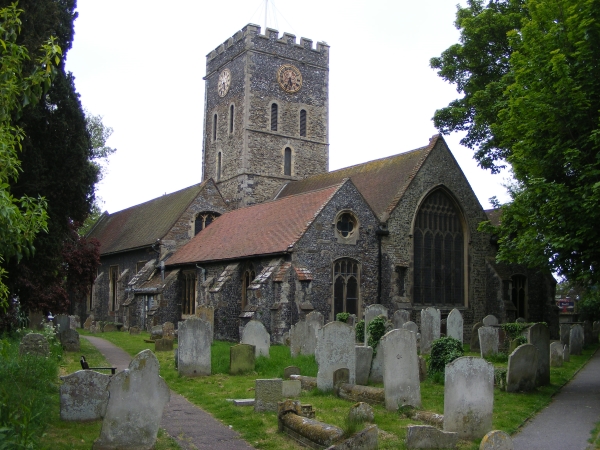 Today’s image for Day 326 of the VM_365 project shows the parish church of St Laurence, Ramsgate viewed from the western end.

A church at St Laurence was founded in 1062 and the church  is mentioned in Thorne’s Chronicle of St Augustine’s Abbey when it was given to the Abbey in 1124. The church like St John’s, Margate and St Peter’s, Broadstairs was one of the chapels to the Mother church at Minster which featured on Day 322 of the VM_365 project until it became a parish church in its own right in 1275.

The church followed the same pattern as the churches of St John and St Peter, being enlarged in the late 12th century and the naves, arcades and the tower; which is constructed of Kent ragstone and flint with Caen stone dressings, are of this phase.

The upper part of the tower with its crenellations  is clearly different from the lower stages and dates to around the 15th century along with the construction of the south porch.

The churchyard contains a number of tombstones dating to the early 18th century, mainly located within two or three metres of the northern side of the church, that are decorated with crossed bones and winged cherub’s heads.