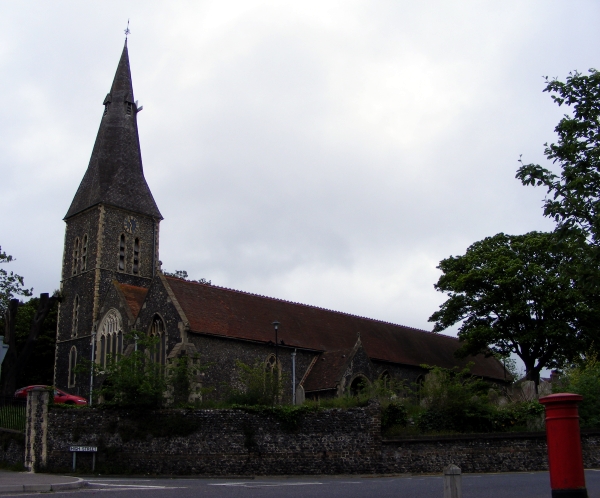 Today’s image for Day 324 of the VM_365 project shows the large parish church of St John the Baptist, Margate. It is located on high ground about a mile inland from the coast and would have been widely visible throughout the parish before the town became more built up in the 19th and 20th centuries. The church was constructed mainly in knapped flint with some ragstone used later.

St John’s was a chapel to the mother church at Minster until 1275 when it became a parish church in its own right. There may have been a church here as early as the mid 11th century although parts of the original surviving Norman church were probably constructed in the mid 12th century. The Norman church was much smaller than the current structure although it did have a north aisle of two or three bays and part of the existing north aisle and the chancel arcades date to this phase. The church was significantly extended to the west later in the 12th century and the rest of the north and south aisle were added.

In the late 15th to early 16th century, a treasury built of kentish ragstone with a low pitched roof and crenellated parapet was built at the north east end of the church which suggests that the church had become wealthy enough to need somewhere to secure valuables. It later became the place where the churchwardens administered poor relief and as a secure store for gunpowder and weapons.

The exterior of the church was heavily restored in the 1870’s by the well known architect Ewan Christian.

Historic England 2015. The National Heritage List for Britain: The Parish Church of St John the Baptist. List entry no.1351103. http://list.historicengland.org.uk/resultsingle.aspx?uid=1351103&searchtype=mapsearch