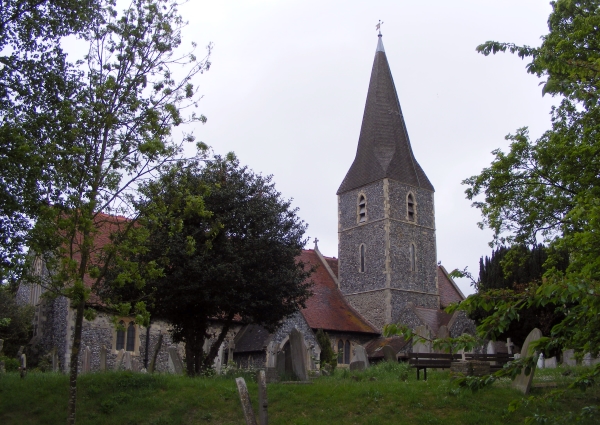 The image for Day 323 of the VM_365 project shows the parish church of All Saints, Birchington. The church is located on high ground approximatley 1.2 km (¾ mile) from the coast and although now  heavily built up,  the landscape would have been open all the way down to the sea until around the mid 19th century. The churchyard is large and open and has been terraced along the hillside to accomodate the 19th century extension to the graveyard.

The church was a chapel to the church at Monkton along with Woodchurch/Acol and was part of the possessions of Christ Church Priory, Canterbury until the Dissoloution when it was passed to the Dean and Chapter of Canterbury.

All Saints was constructed in the 12th century or earlier using flint and Caen stone and had already been aisled by the late 12th century. The earliest surviving fabric exists in the lower outer aisle walls, with some reused Caen stone blocks in the upper face of the south west aisle and the south doorway, although restored in the 1860’s, retains two capitals dating to the later 12th century. Two of the reused blocks may be from the tops of earlier Norman windows associated with the phase before the construction of the aisles.

The chancel was rebuilt in the earlier 13th century, flanked by two new chapels to the north and south and a new tower was constructed. The south chapel, dedicated to St Margaret extended under the tower, the chapel on the north side was dedicated to Our Lady. Both chapels were later dedicated to the Crispe and Quex families.

The nave arcades were rebuilt in the 1340’s and a new chancel arch added using flint and Rag stone. The 14th century north doorway, which was blocked in the 1860’s still survives. Most of the later medieval features were removed from the church probably when the whole of the exterior of the church was heavily refaced and ‘restored’ in the 1860’s using flint and Bathstone. New vestries were added to the south east of the church in 1910-11.

The founder of the Pre-Raphelite movement, Dante Gabriel Rossetti; poet, painter and illustrator, died at Birchington in 1882 and is buried in the churchyard. His monument is located near the south porch.

One thought on “VM_365 Day 323 The parish church of All Saints, Birchington.”