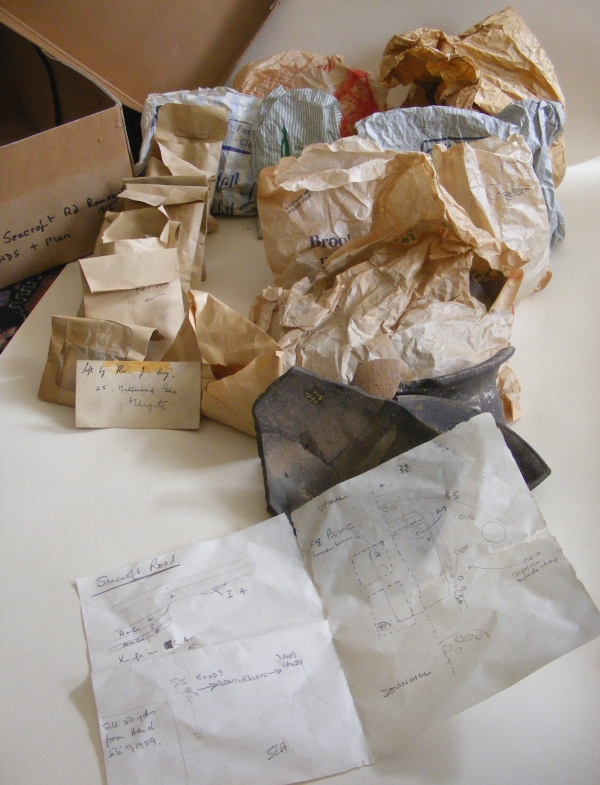 The Image for Day 293 of the VM_365 project is of the contents of the small cardboard archive box we started to look at in the post for Day 292. Although we have an idea from the label of the general area where the material may come from, a site at Dumpton Down between Broadstairs and Ramsgate, there is no record of what is actually in the box.

Our first task is to see what sort of material the archive contains, and what condition it is in. Then we need to know what sort of information it might be able to give us. In fact, even at first examination the box contains some very useful material. At least the box doesn’t contain bags of unwashed pottery or dried up leather.  The artefacts, which generally seem to be  pottery sherds of small to large size, seems to have been processed well.

Among the  containers stored in the box amount to eight paper bags from shops, which in themselves amount to something of a historic archive. There are also eight small brown paper envelopes, of a type people would have received cash wages in. Another similar wage packet envelope as a clear window in the front. There is one standard small brown envelope and a quantity of loose pottery sherds, some glued together to reconstruct part profiles. A small card in the box has the address of the excavator, Mr. Joe Coy,  from the  1960’s or 70’s written on it.

Best of all, there is a small paper sketch plan of an excavation, possibly where the artefacts came from. It’s not a perfect plan but it will help to evaluate what the finds in the bags can tell us. Each bag seems to have a feature code written on it, which may correspond with the plan and most of the sherds are marked with a site and feature code.

Although perhaps the containers leave something to be desired in archive stability, polythene mini-grip bags are probably preferable to a paper bag from a butcher’s shop in Margate, they have retained their contents reasonably well in the half century since the excavation was carried out.

In our next post for VM_365 Day 294 we will take a look at what is actually in some of the bags and what we might learn from the finds.