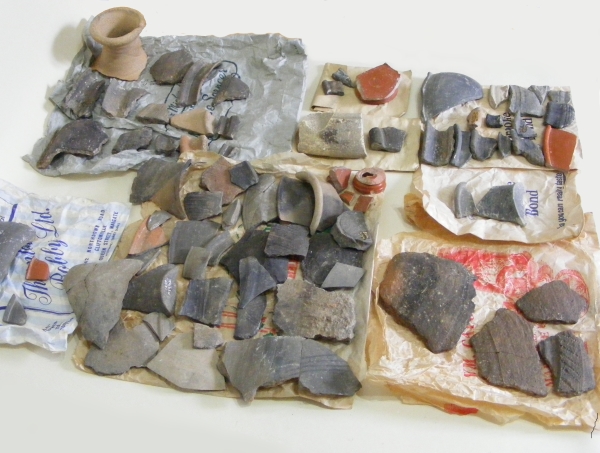 The image for today’s post on Day 294 of the VM_365 project shows the contents of some of the paper bags, stored in an archive box from an excavation carried out by Joe Coy with the Thanet Excavation Group at Dumpton, between Broadstairs and Ramsgate in 1964.

To understand how important the information contained in the archive is, we need to carefully examine how and why each item has been stored and labelled. In the image above the sherds are laid out on the paper shop bags they were stored in so that they can be assessed in more detail. Later they will need to be catalogued and put into plastic bags which will help to ensure their safe storage in the long term

All but two of the bags in the 1964 excavation box contain pottery sherds. The sherds have generally been marked with a site code and feature number, which we now know corresponds with feature numbers on the sketch plan in the box.

There seems to be no corresponding finds list, description of the pottery or dating for the items in the archive box, so each pottery sherd  may have to be re-examined to understand the date range of the features fully.

However even a casual examination of the material reveals the span of the dates covered by the sherds, apparently a classic assemblage spanning the Late Iron Age and Early Roman period. Many of the pottery sherds are comparable with typical vessel types from other sites the local area, which have featured in earlier VM_365 posts.

The site excavated by Joe Coy and the Thanet Excavation Group in 1964 is very close to a large site excavated at Dumpton Gap by Howard Hurd, one of Thanet’s archaeological pioneers. Although Hurd emphasised the Iron Age aspects of his site, described by him as the remains of ‘a Late Celtic Village’, later excavations suggested that there was a more significant Roman element to the settlement than was previously thought. As we start to understand the 1964 archive, it looks likely that this will make a significant contribution to understanding that Roman settlement phase here.

The analysis will continue in subsequent posts.