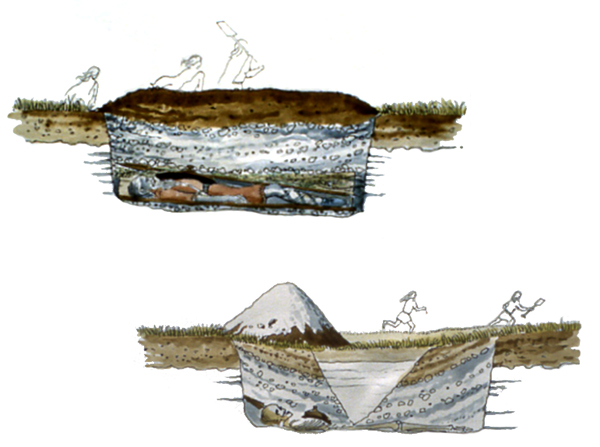 The image for Day 216 of the VM_365 project is drawn from our slide collection, with reproductions of a series of sketches illustrating aspects of the archaeology of the Anglo-Saxon cemeteries that are such a significant part of Thanet’s archaeological landscape.

The images in today’s post illustrate a common phenomenon encountered during the investigation of Early Anglo-Saxon cemeteries where archaeologists began to discover that they were not always the first to have dug into the graves furnished with valuable  goods such as weapons, items of jewellery, clothing and vessels in pottery and glass. It is now recognised that many early Anglo-Saxon graves that were were robbed not long after they had been created.

The upper part of the image in today’s post shows a section through a recently created grave, with its occupant dressed in typical costume and accompanied with a shield, sword and knife. In the distance the family are leaving the graveside. In the lower image, two grave robbers have excavated a pit into the centre of the mound that marks the site of the grave, piling the spoil in a heap. They too are seen making a hasty exit with the objects they have recovered.

Grave robbing at an early period has been recognised in many of the large early medieval cemeteries of northern Europe and the phenomenon extends to the cemeteries of East Kent. Although initially it may seem that the motives are relatively simple, recent study has started to consider whether the practise has more complex meanings, perhaps associated with the growth of Christianity and the ambiguous relationship of the converted population with the pagan graves of the pre-Christian era.

Len Jay used his talents as an artist to visualise the processes that were being observed in excavations and explored their meaning through his visual representation, which complemented the body of written material that was also being generated.