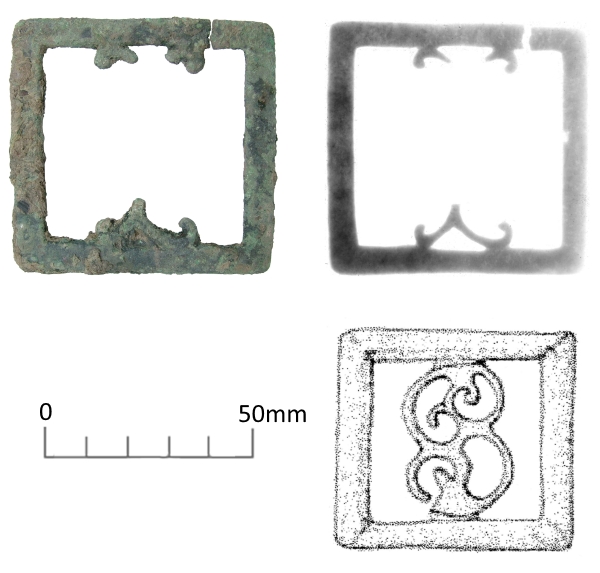 The  image for Day 125 is of a copper alloy object, found in the the excavation of a Roman building at Broadstairs.

On two sides of a square flat frame (top and bottom in the image) there are the remains of attachments  for a central panel of decorative openwork which is now missing. The X-Ray image on thetop right of the image shows the attachments in finer detail  A leather belt strap would have been hooked over the outer frame, under the patterned centre and over the frame again, creating a decorative adjustable buckle for the belt.

Although the connecting attachments of the openwork could not be matched exactly to any similar pieces, this style of  buckle has been found in military contexts  in Britain and across Europe.

Two variants of this sort of openwork buckle have been found at the Roman fort at Richborough, other published examples come from Dacia (modern Romania) and  Osterburken in Germany. An illustration of a similar buckle from the Fort of the Roman military unit Cohors I Breucorum from their base at Pfunz in southern Germany is shown for comparison with the Broadstairs find at the bottom right.

The question is what was this buckle doing in Broadstairs?