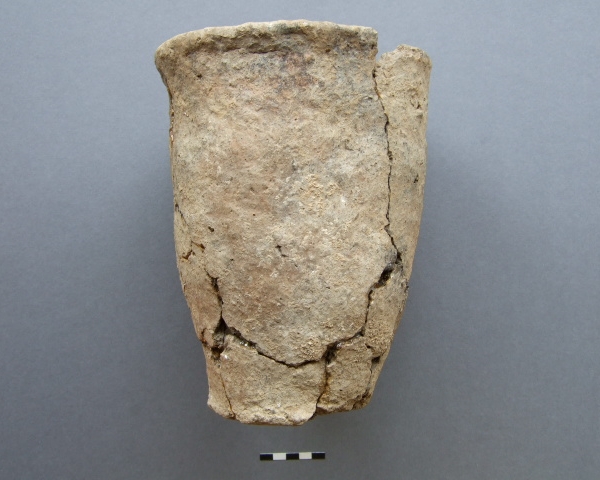 The image for Day 212 of the VM_365 project shows an Early Bronze Age Urn found buried with a crouched inhumation within a ring ditch at the former Dumpton Greyhound Stadium, Ramsgate in 2000. It was excavated by Kent Archaeological Rescue Unit (KARU) and is now in the Trust’s stores.
This vessel presents a slight conundrum. Rather inconveniently our Ancestors did not always do things according to strict tradition. In this instance we do know that this ‘Urn’ is definitely of Early Bronze Age date, since it came from a crouched inhumation within a burial ring-ditch. However it rather obviously lacks any decoration and the form is not altogether informative either. Superficially, its rather basic form is quite untypical of any of the four main Early Bronze Age often richly decorated ceramic traditions – Beaker, Food Vessel, Collared Urn or Biconical Urn. However, its fabric is coarsely grog-tempered – hence its rather lumpy surface. This aspect and its buff-fired surface is much closer to some of the manufacturing trends associated with the Collared Urn tradition, current between c.2000-1600 BC so that, despite being a rather unimaginative creation, it can be confidently placed into this period at least.
This vessel joins the vessel shown on Day 200 as an example of an outlying variation in what are usually quite standard vessel forms.
The Virtual Museum would like to thank Nigel Macpherson-Grant for this information about the vessel.