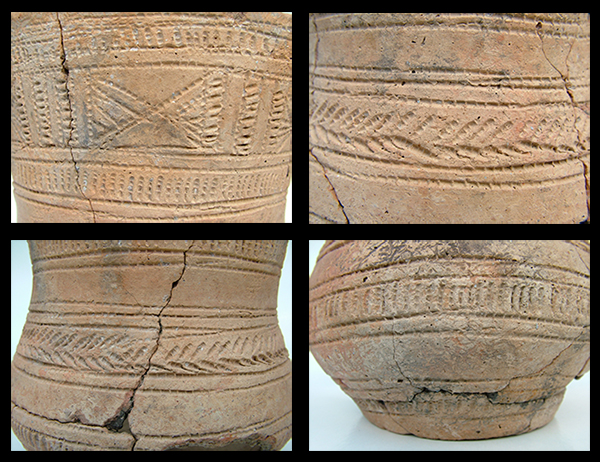 Our image for Day 177 of the VM_365 project shows four close up pictures of the decoration on the body of the Beaker vessel from North Foreland shown yesterday for Day 176.

The first impression is that this vessel looks like a very finely and carefully decorated pot but if you look closely you can see that this is not the case because there are some errors in the execution of the decoration.

The decoration was applied using a comb with square-sectioned teeth and is arranged in four zones. The neck (top left) is decorated with opposed filled triangles bordered above and below by a ladder pattern defined by encircling combed lines. The triangles are separated from each other by three vertical ladder motifs.

The waist decoration (top right and bottom left) is separated from the neck decoration by a plain band approximatley 1 cm deep. The waist is made up of a band of herringbone motif bordered above by three, and below, by two encircling lines. There is overlapping in the decoration.

The belly (bottom right) is decorated with a ladder motif and is separated from the waist by another plain band and is encircled above and below by two lines.

The base decoration (Bottom right) is separated from the belly by an undecorated band and comprises a zone of ladder pattern similar to the belly but more untidy where there seems to have been an attempt at forming three encircling lines above and two below but the execution is careless and there is overlap between the horizontal and vertical elements. The lower part of the vessel is undecorated.

How did the potters decide how to divide up the vessel into decorative areas and what patterns to apply? Did they use mathematical principles to divide up the circular space or were there rules of thumb that made the job easier? Perhaps we will never know.

Gibson, A. 2005. The Beaker and other Pottery from Beaufort, North Foreland, Broadstairs, Kent. Unpublished Pottery Report.