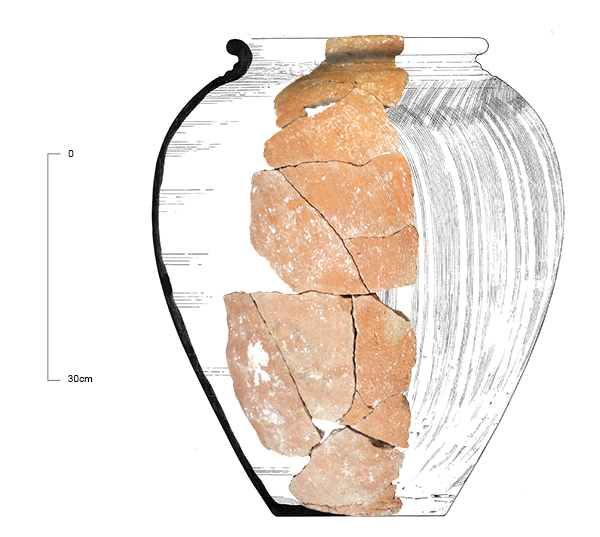 Today’s image for VM_365 Day 105 shows the largest of the vessels that were reconstructed from the pot sherds that seem to have come from a kitchen at the Roman building excavated at Fort House, Broadstairs. Among the fragments recovered were 147 pieces from this large storage jar, some of them very large. Pieces of this vessel, withtheir distinctive combed surface decoration are very obvious in the image of the pottery dump shown in VM_365 Day 98.

The sherds making up the rim are pictured in the front left of the picture published for VM_365 Day 100. The pot had a diameter of around 36cm making it much larger than any of the other vessels present, dwarfing the smallest cups and jars. The outer surface of the vessel had been fired to a red colour, while the interior had gone black. The outer surface was combed while it was still soft to create a pattern of vertical stripes over the whole body.

Although a large number of pieces could be joined together, it was only possible to reconstruct the full profile of one large slice of the vessel’s body due to its size, using a series of large interconnected sherds which are shown in the image. However, one section  was enough to create the drawing of the whole vessel that lies behind the image of the sherds. The curve of the reconstructed section can be projected to show the volume of the whole pot.

Like many of the vessels excavated in the kitchen pot dump, the manufacturing traits of the grog tempered fabric of the storage jar reflected the transition from a Late Iron Age ‘Belgic’ potting tradition into a more Romanised fabric, of a type known as ‘Native Coarse Ware’. Vessels of this type were produced from the late Iron Age into the 2nd century of the Roman period, this one probably in the range of 70-150 AD.

What would such a large jar be used for? Perhaps for storing clean water, or perhaps another liquid like milk. It may also have been used in another cooking or preserving process such as brining or curing a large piece of meat.