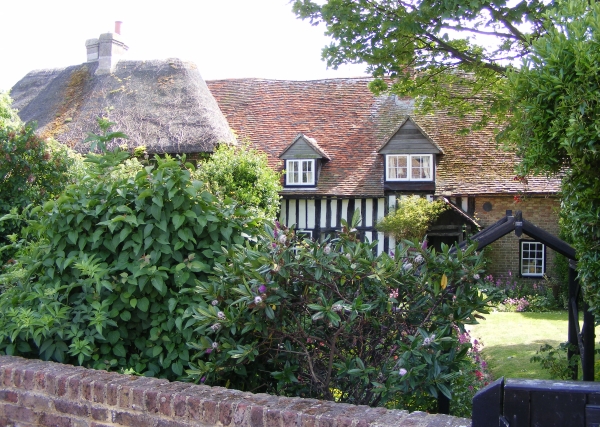 Today’s image for Day 332 of the VM_365 project shows the farmhouse of Lower Gore End Farm, Minnis Bay, Birchington which was established around 1540 or earlier.

Old Bay Cottage along with Elder Cottage formed the farmhouse of Lower Gore End Farm, all that remains of this farmstead which would originally have been isolated,  away from the focus of the village at Birchington to the east.

The farmhouse was originally detached and was located with its gable end facing on to the farmyard. Historic maps indicate that working farm buildings were located on two sides of the farmyard which faced side on to the route from the village of Birchington to Minnis Bay, now known as Minnis Road.

Old Bay Cottage, on the right of the image, is the oldest part of the farmhouse and was built in the 15th century as a two storey timber framed cottage with a tiled hipped roof and close studded timbers. The porch, which is just visible, was a later addition. The thatched roof visible on the left side of the image belongs to the 18th century extension known as Elder Cottage.

Lower Gore End Farm was quite isolated in the early to mid 19th century and surrounded by agricultural land, with Minnis Creek nearby still flooding nearly as far as the farmstead at the spring tides. It was probably still possible to have a clear view of the parish church of All Saint’s, Birchington from the farm although by the 1870’s new roads were beginning to be laid out at Minnis Bay, west of the relatively new railway line and brickfields were beginning to encroach on the agricultural land. By the late 19th century the farm was nearly surrounded by brickworks and by the 1950’s was surrounded on the north, east and west sides by suburban development focussed on Minnis Bay.

Nowadays the farmhouse is all that survives of the farmstead, completely surrounded by suburban development but still remains as an indicator of the once isolated rural character of Minnis Bay.