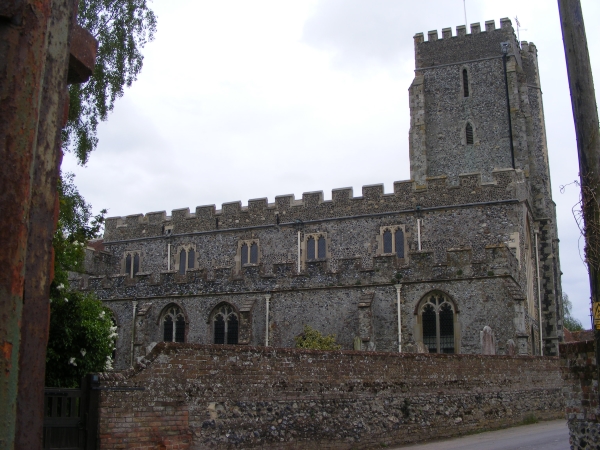 Today’s image for Day 321 of the VM_365 project shows another of our standing archaeological remain, this time the church of St Nicholas, St Nicholas-at-Wade, near Birchington.  The earliest church at St Nicholas was built in the late 11th century and parts of it survive in the lower portions of the west wall of the nave. The original church was constructed of large flints and sandstone from the Thanet Beds.

By the mid 12th century a south aisle was added to the nave and the arcade still survives. A north aisle may have been built at the same time but was replaced in the early to mid 14th century.

The church was a Chapel to Reculver until the end of the 13th century along with Sarre and Shuart. In the late 12th or early 13th century, a new east end was built with a new long chancel and two smaller chapels on either side. New windows were inserted into the chapels and the chancel in the late 13th to early 14th century; traces of the original east lancet windows are still visible in the walls of the east chapels where they are cut through by later windows.

The church was enlarged in the mid 14th century after it became a parish church in its own right in 1310 and as a result of an increase in the local population. Major rebuilding of the nave was carried out with a completely new north aisle and arcade constructed in Ragstone and Caenstone. A new tower was also built at the same time and a new south porch added sometime after. In the late 15th century, a new clerestory to the nave was built and the top of the tower, the aisles and porch were crenellated with knapped flint parapets.

In the mid to late 18th century, the south chapel was used as the parish school and its brick chimney stack is still visible. The chancel was repaired, the east wall rebuilt and the nave restored in 1875 and 1876.

While at face value parish churches may seem to be a steady and unchanging part of the fabric of Thanet’s village landscapes, they represent buildings that were constructed from the late Anglo Saxon period and continues to evolve as architecture until the present day. The story of these buildings is preserved in their visible structure if we take the time to read them properly.

One thought on “VM_365 Day 321 The parish church of St Nicholas, St Nicholas-at-Wade”