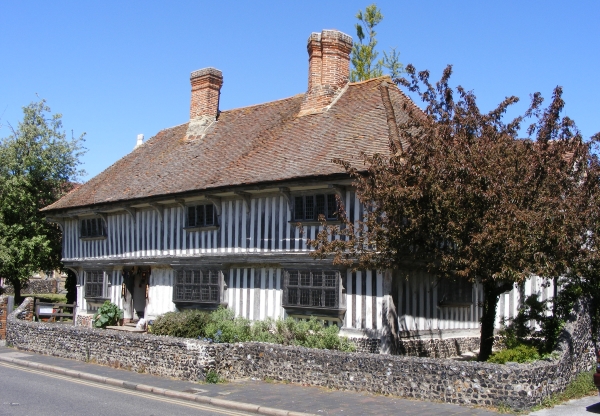 Today’s image for Day 320 of the VM_365 project shows another of Thanet’s earliest standing buildings, the Tudor House at Margate. The house is of timber framed transitional type; a cross between the open hall house of the medieval period and the early modern house. The transitional house retained the high and low end arrangement of rooms that were seperated either side of the open hall  during the medieval period but did not have the open hall and was instead storied along thefull length of the first floor.

This high status timber framed building dates to the period around 1525-1550.  It was originally built for a wealthy household, possibly a farmer with additional sources of income and was heavily restored close to its original form in 1950 after having previously being subdivided into cottages sometime in the early to mid 19th century.

The Tudor house has a continuous jetty along the first floor and is  supported at the corners by dragon posts. It also has a jettied roof  supported internally by crown posts. In the western end of the building, where the service rooms were located, is a chalk and flint constructed cellar. The house was heated by two brick built chimneys.

The original windows, some of projecting oriel type, were glazed throughout, a conspicuous sign of the wealth of the owners of the building. Projecting Oriel windows can be seen on the ground floor in the image above.

Sometime in the 17th century an extension was added to the eastern end of the building to accomodate a larger stairway and the parlour ceiling was lavishly decorated with a plaster ceiling embellished with Tudor roses, grapevines and other motifs common at the time.

A 17th century malt house which featured on Day 67 of the VM_365 project was constructed to the rear of the building and its remains can still partly be seen  today.

The Tudor House is open to view by the public and is well worth a visit.