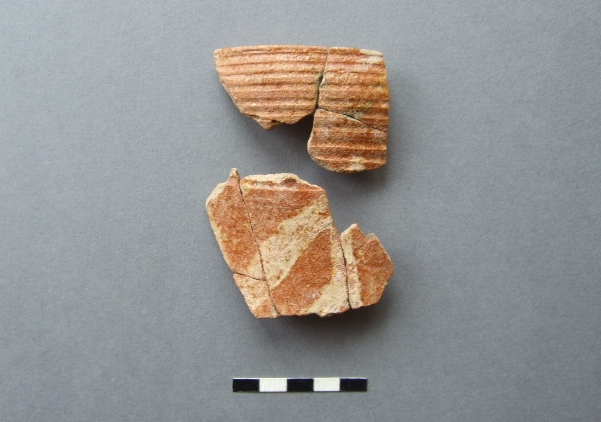 The image for Day 318 of the VM365 project shows sherd fragments from a medieval tableware jug found in 1979 in an excavation at Netherhale Farm, Birchington.

The late David Perkins conducted a trial excavation  to test the cropmarks of a double ditched enclosure on land between Birchington and St.Nicholas-at-Wade. The excavation revealed a Mid-Late Bronze Age farmstead enclosure (c.1350-1150 BC) underlying a medieval farmstead  enclosed with a ditch. This site could possibly be the medieval forerunner of the modern Netherhale Farm which stands  just to the north of the site.

The cropmarks lie on a very slight knoll and presumably was chosen in both periods of settlement for its well-drained position. Apart from some deeply cut ditches and pits, the ditches and the settlement they enclose have been heavily plough-reduced.

The Medieval phase of occupation produced the fragments from the tableware jug shown above which are from a fairly tall ovoid-bodied jug.  The rim is shown in the upper part of the image, with a horizontally incised neck below and the upper shoulder and body has been painted in white slip with vertical and diagonal stripes under a clear orange (iron) glaze over.

The jug was made at the Tyler Hill potteries near Canterbury and the form, type of decoration and the firing qualities date its manufacture to between c.1250-1325 AD,  a period known in art-historical terms as the ‘High Medieval’ .

Although this vessel is perhaps not as constructively creative as the Scarborough Ware ‘knight’ Jug or the south-west French polychrome-painted jug which were contemporary with this example,  its striking colours and design would have made a handsome addition to the farmstead’s dinner table.