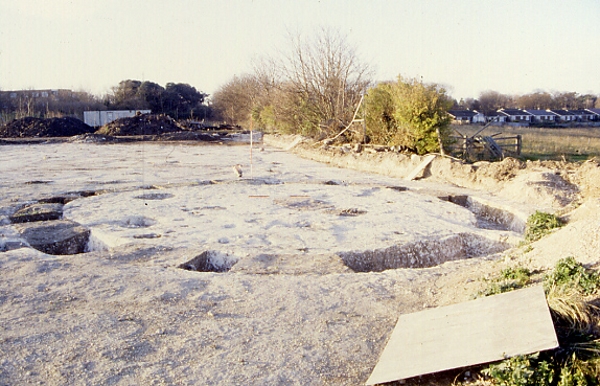 For the image on Day 289 we have a picture of the ring ditch of a small round barrow,  located at the western edge of the St. Stephens College excavation site at North Foreland, Broadstairs. The barrow stands on the crest of the chalk ridge with the land falling away to the north and north west.

The ditch was formed of two fairly regular arcs, joined by a short straight ditch at the southern end which created an almost complete circuit with a diameter of 9.6m. On the northern side of the ring ditch a 0.4m gap between two square ended terminals formed a narrow causeway from the outside to the inside of the circuit. The small dimensions and irregular shape have been compared with a barrow of similar dimensions that was found at South Dumpton Down, Broadstairs. The primary burial at Dumpton Down dated to the Beaker period, in the Early Bronze Age, suggesting the barrow at North Foreland dates to the same period.

The ring ditch at North Foreland was excavated by digging fourteen segments at regular interval through the dark loam deposits with irregularly distributed chalk and flint inclusions that filled the ditch. A flat based profile with very steeply sloping or near vertical sides was exposed along the whole length of the ditch, which only survived to a depth between 0.42 and 0.57m;  the width varied from 0.75 and 0.9m.

Like many of Bronze Age barrows featured in the VM_365 posts, on Day 271 and Day 286,  several of the upper fills of a ditch originally cut in the Early Bronze Age contained pottery dating to the Iron Age. Like the other barrows, this small example must have remained as an earthwork in the landscape, only to be completely filled in the later Iron Age period.

Two grave cuts were identified within the circuit of the barrow ditch; one positioned centrally and the other on the southern edge. Another more unusual grave cut was  found cut into the base of the north western arm of the ring ditch, these will be explored in more detail in later VM_365 posts.