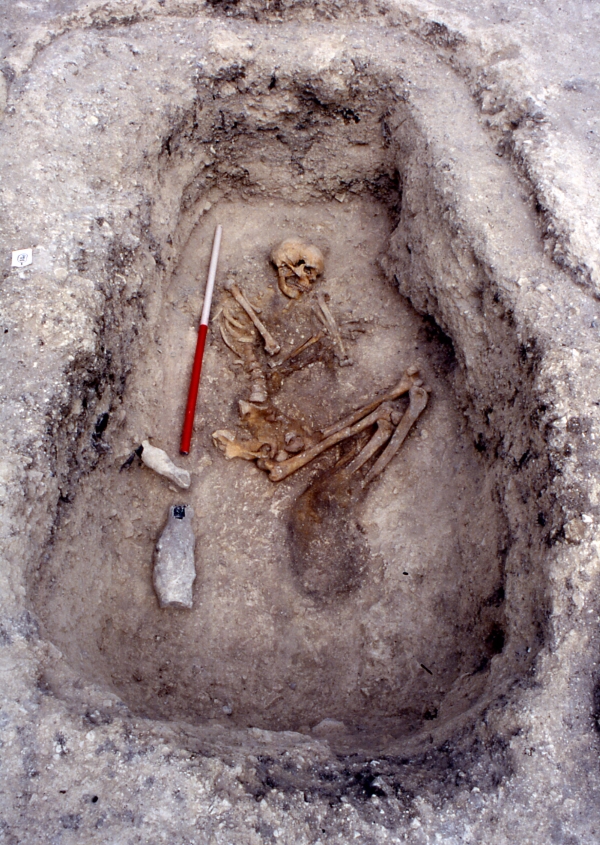 The image for Day 287 of the VM_365 project shows the burial that was located at the  centre of the ring ditch of the Bronze Age barrow that featured on Day 286 of the VM_365 project. A second burial, probably inserted at a later date and associated with the refurbishment of the ditch circuit, was located on the northern edge of the Barrow platform

The large rectangular grave cut measured approximately 2.6 metres long by 1.6 metres wide and  was 0.76 metres deep, with a north east  to south west orientation. The skeletal remains of a mature adult male, aged approximately 30-40 years old were found at the base of the cut. The body been placed on its left side in a crouched position with arms and legs flexed, facing east. The head lay at the northern end.

In the image a chalky fill remains in the grave after a softer inner deposit had been removed to expose the skeleton. The soft deposits surrounding the body suggest that it may originally have been placed within a coffin, or similar structure such as a wicker basket which retained the chalky fill against a vertical edge. The inner area retained by the structure measured approximately  1.05 metres wide by 2.08 metres long. This was placed in the northern half of the grave cut and the space left at the foot of the grave may have contained food or other offerings which have not survived to be recovered in the excavation. The grave seems to have been backfilled around the inner chamber soon after the coffin was deposited in the grave.

In the upper fill of the grave there were 44 sherds of Early Iron Age flint tempered pottery and fragments of charred wood, which may be associated with disturbance from the Iron Age settlement that was established around the barrow.