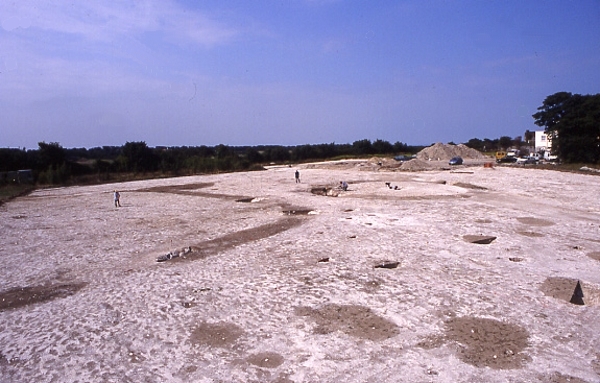 The image for Day 284 of the VM_365 project shows archaeological excavations in progress in 1999, at the site of St Stephen’s College, at North Foreland, Broadstairs. The view in this picture faces north west toward the mouth of the Thames Estuary, although the sea is hidden behind the range of trees at the top of the picture.

The  St Stephen’s College dig site is located just to the east of the cropmark group at North Foreland that was shown in yesterday’s image for VM_365 Day 283. One of the ditches that shows in the cropmark extended into the site.

The wide range of features found on the site are all represented in the picture. On the top, right hand side is the ring ditch of one of three Bronze Age round barrows excavated on the site. This barrow contained three burials, a large rectangular central grave cut and a second, smaller, oval grave cut on the northern side of the Barrow. A second burial had been inserted in the upper fill of that grave. The circuit of the barrow ditch had been recut in the Iron Age, possibly to form a hut platform.

On the left side of the picture you can see the ditches of an enclosure, dating to the Middle Iron Age. An  entrance causeway formed by a break in the ditch circuit can be seen at the front. Some of the ditches that branch to the top of the hill from the trackway that can be seen in the cropmarks on the hillside lead directly to the rectangular encloure.  At least six structures built with four timber posts were enclosed within the rounded rectangular ditch, although these could be from a different phase of the settlement when the ditch was no longer visible.

The group of storage pits visible in the foreground, close to the entrance of the enclosure, were dug over a period of time spanning the Middle to Late Iron Age.  One of the storage pits located in another part of the site, not shown in the image,  was reused for a burial which featured in a sequence of VM_365 posts on Day 123, Day 43 and Day 113. Iron Age objects found in some of the pits excavated on the St. Stephen’s site including Bridle bits, a bone handle, loom weights and evidence for chalk plastered structures have also been posted as part of the VM_365 project.

The tiny figure present in the middle of the enclosure is the Trust’s first Director Dr Dave Perkins who led the excavations in 1999.

3 thoughts on “VM_365 Day 284 Excavation of a Prehistoric site at North Foreland, Broadstairs”