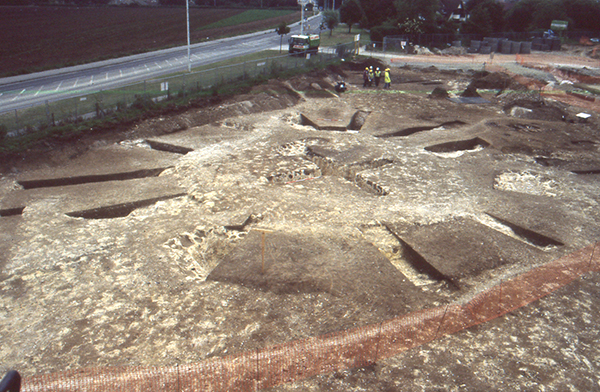 Today’s image for Day 259 of the VM_365 project shows the foundations of a medieval post mill which was excavated prior to the construction of the ASDA superstore at St Peters, Broadstairs in 1999.

The Post Mill is the earliest type of Windmill in Europe. The whole structure of the mill, its sails and internal machinery were supported on a central pillar which allowed it to be turned to bring the sails into the prevailing wind. The  central pillar formed part of a trestle structure.  A cross shaped foundation, called a Cross tree, was laid in a trench and supported four angled braces called quarter bars, that propped up the central pillar. The trestle may have been buried in a mound of earth.  A tail pole was used to turn the sails into the wind.

The foundations of the trestle, visible as a cross, are shown in the centre of the ring ditch. In the image above, a number of segments have been excavated through the circuit of the ring ditch which surrounded the mill in which the tail pole would have been swung to turn the mill toward the wind.