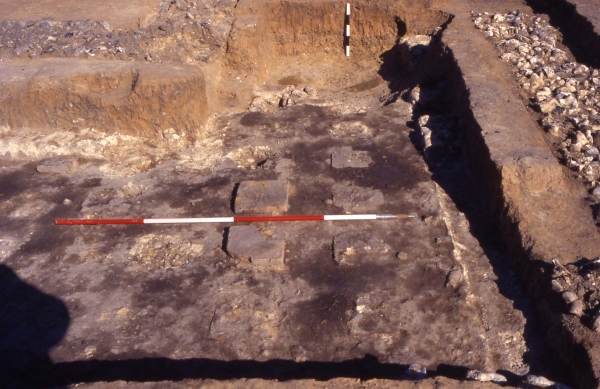 Today’s image for VM_365 Day 243 shows the remains of a hypocaust underfloor heating system from Building 4 of the Abbey Farm Roman villa complex at Minster, Thanet. The remains of the hypocaust structure survive to a depth of only around 0.5 metres below the base of the plough soil.

Building 4 was a two roomed corridor house seperate from the main villa building. The corridor house had a  small heated room in one corner. Like most of the buildings in the villa complex, this structure had been heavily robbed in the Roman period and later for reuseable building materials, including the large flint cobbles that were used in the building foundations.  In the case of the heated room in Building 4 the tiles that had been used to build the pilae stacks that supported the hypocaust floor had all been taken to be used elsewhere.

In the picture above the wall foundations around the edge of the hypocaust have been robbed leaving the raised lip of the  mortar floor and a few cobbles to suggest where the walls had been. Only the tiles that were bonded to the floor with mortar and were too difficult to remove remain in place, leaving scars in the mortar and parts of broken tiles to show where the stacks had been.