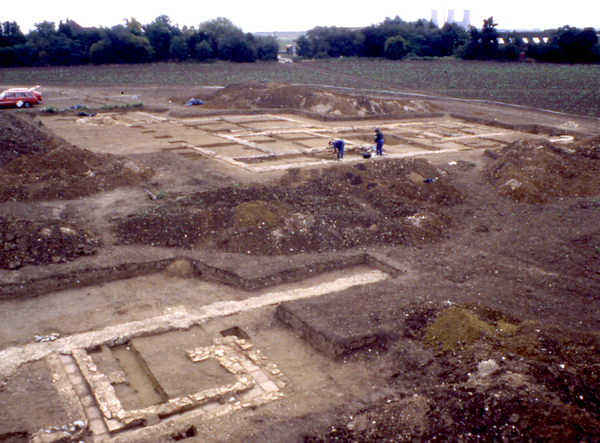 Today the image for VM_365 Day 241 is a view of the excavation of the west wing of the Roman Villa at Abbey Farm, Minster in Thanet. The villa is the largest Roman building to have been excavated in Thanet and it was exposed over several seasons of excavation when it was adopted by the Kent Archaeological Society for a training excavation.

The picture is taken from the west side, facing south east toward Richborough. The Villa’s boundary wall is in the foreground, with a stone and tile structure attached to it. In the upper middle of the picture the foundations of the main east west range of the villa and its western wing are exposed, following the removal of the thin layer of topsoil that covered it. The curved apse from the central hall in the main range can be seen in the top left limit of the building foundations.

Like much of the archaeology found on Thanet, heavy ploughing has reduced the walls of the villa almost to the base of their original foundation trenches, leaving only one or two courses of stone to mark out the floor plan. Only the deep chambers for the hypocaust systems for heated rooms that were originally constructed below ground survived in the main villa structure. Occasionally, deep cut channels like the tile lined structure in the foreground also survived.