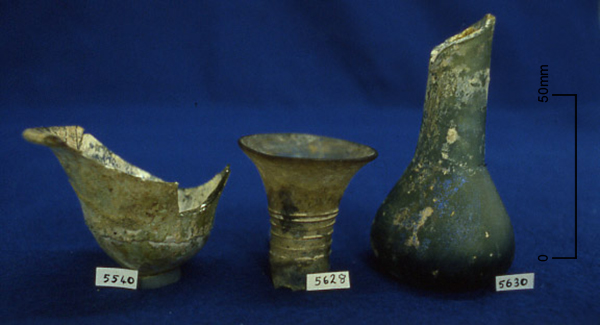 Today’s VM_365 image for Day 208 of the project shows three glass vessels which were part of the Rowe Bequest, a collection donated to the people of Margate by Dr Arthur Rowe.

In 1986, David Perkins, the first Director of the Trust for Thanet Archaeology, was involved in cataloguing the artefacts belonging to the Rowe Bequest which had been housed in the Old Margate Museum prior to the Second World War. A number of the artefacts in the Rowe Bequest were associated with the Anglo Saxon cemetery at Half Mile Ride, Margate. Using  Rowe’s notes and modern archaeological research, Perkins was able to publish a reappraisal of the cemetery in the county journal.

While cataloguing the items, Dave Perkins identified the three glass vessels, pictured above, which had been packed along with the artefacts from the Half Mile Ride collection but were not been mentioned in the museum records.

The first of the vessels (on the left) is a green glass Base Cup dating to around the 7th century. A stand obscures the pointed base of the vessel in the photograph; it was originally manufactured so that the contents of the vessel had to be fully consumed before it could be put down on its rim. Perkins confirmed that the Base Cup was from one of the graves of the Half Mile Ride cemetery.

Despite being from two seperate vessels of different dates, the two other fragments shown in the centre and on the right, had been reconstructed incorrectly to form a ‘single’ vessel and had been described in the old catalogue as Roman, suggesting they were probably from the Twenties Brickfield approximatley 300 metres to the north west of the Half Mile Ride graves. Dave Perkins was able to show that this catalogue entry was not right.

The body and base on the right are from the lower part of a flask of thick blue green glass dating to the Roman period. The rim and neck in the centre are actually from a clear glass pouch bottle with glass thread decoration around the neck,  actually of Anglo Saxon date. The pouch bottle also dates to around the 7th century. Perkins was able to confirm that it also came from the Half Mile Ride cemetery.