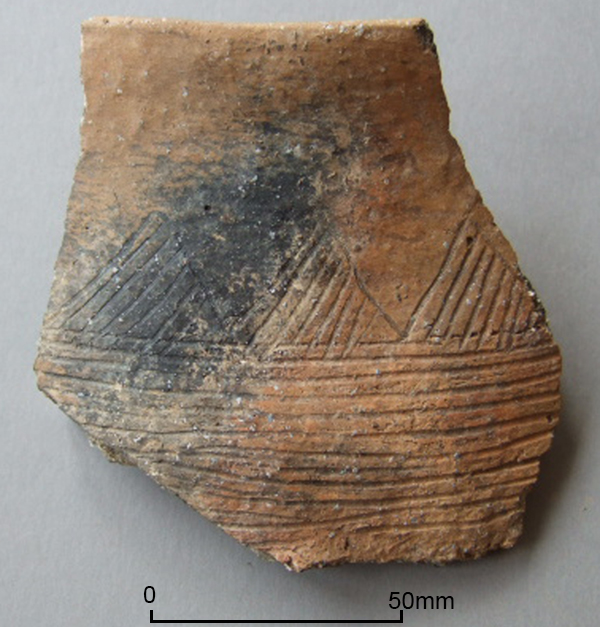 For Day 207 of the VM_365 project our image is of a large body sherd from a middle Bronze Age fineware globular urn showing the detail of the pattern of filled triangles above a series of  horizontal lines scratched into its surface. The urn was found in  the fill of a ditch at Hartsdown near Margate and was probably made between c.1550 and 1350 BC.
The ceramics of the Middle Bronze Age period are currently divided into two periods, one spanning the period  from around 1550-1350 BC and a period of transition into the Late Bronze Age from around 1350 to 1150 BC.
The pottery of the first period is epitomised by coarseware barrel or bucket jars, frequently with thick-walls, of the ‘Deverel-Rimbury’ style. There are also small tub or bowl forms and thinner walled finewares;  ‘globular urns’ and beakers and small jars that were probably drinking vessels. Sometimes much larger versions of these forms were made.  All of these were flint-tempered fabrics.
In the second transitional period there are some changes in shape, to some degree large heavy-bodied coarseware jars and tub forms continue to be made. A new form typical of the transitional period is the hooked-rim jar, frequently with perforations below the rim. Vessels with mixed tempering, with both grog and flint in the fabric, are fairly often present. Globular Urn vessel types tend to disappear, replaced by other vessels like the Birchington bowl which contained the Bronze hoard shown on Day 199 and the stamp-decorated jar shown on Day 201.