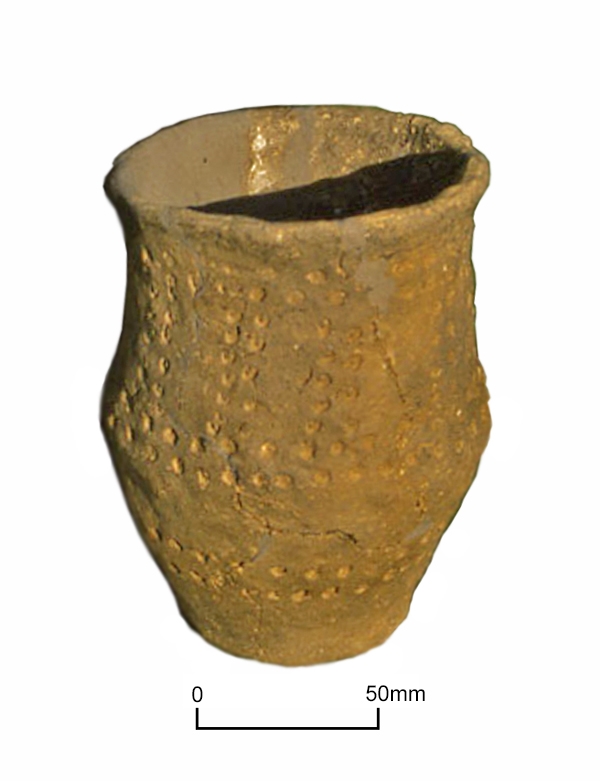 Today’s image for VM_365 Day 203 is of aLate Neolithic/Early Bronze Age Beaker, found in an excavation at South Dumpton Down near Broadstairs in 1992, which was led by David Perkins, the first director of the Trust for Thanet Archaeology.
The beaker was found among a complex group of graves that were enclosed by the ring ditch of a roundbarrow. The graves that were excavated at the centre of the ring ditch contained the remains of seven individuals laid in a variety of orientations. Some of the burials were in crouched positions, others were truncated and disarticulated.
The complexity of the grave group led to some confusion about  what the exact association was between the Beaker and any of the individuals in the grave  group. The confusion was aggravated by the presence of Food Vessel type pottery within the grave group, which is not often associated with Beaker graves. Recent reflection on the exact sequence of events represented by the deposits that were excavated and the initial interpretation made of them, points to the probability that the burial sequence was not properly understood. It seems that the graves within the barrow accumulated over a period of time, cutting through earlier burials and truncating them.
The earliest of the graves appears to be that of an adult buried on its left hand side in a rectangular grave, accompanied by the Beaker. This fits recent discoveries of Beaker burials in Thanet, which generally seem have been made in well cut rectangular graves, probably enclosing a coffin or chamber.
The Beaker is quite crudely made in comparison with vessels like the one from North Foreland shown in VM_365 Day 176, with an unusual scheme of impressed decoration with possible connections to the Netherland’s ‘Potbeker‘ tradition. In the classificatory models that have been proposed for Beakers it belongs to Clarke’s Mid Rhine Group, or Lanting and Van der Waals‘ (1972) Step 3 classification.
The South Dumpton Down Beaker is currently on long term loan to Dover Museum and can be seen in the Bronze Age gallery at the Museum. More information on Thanet’s Beakers can be found in the Beaker gallery of the Trust’s Virtual Museum.