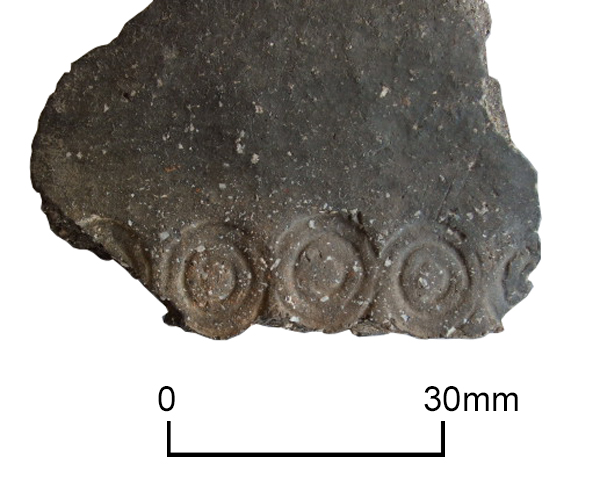 Today’s image is of a decorative motif on a piece of  pottery from the transitional period between the Middle and later Bronze Age.

The sherd from a vessel closely related to the one shown in Day 199, which contained the Birchington Bronze Hoard. Close inspection of the globular bowl from Birchington shows that it was decorated with a horizontal row of stamped rings, following the centre line of the body.

The sherd shown in the VM_365  image today is from another similar flint and grog tempered vessel, this time from Margate. The Margate pot is also likely to have been decorated with a single row of stamps from an object carved with a series of raised concentric circles. The stamping was added after the outer skin of the pot had been burnished to a smooth finish. On the current evidence – including the dating of the hoard from within the Birchington bowl the date of the vessel the sherd came from and other pots like this should be placed between c.1350-1150 BC.

Like much of the decoration applied to Bronze Age pottery, the ring pattern is thought to be skeuomorphic,  each of the stamped rings emulating the rivets that would have joined two sections of a bronze bowl into a globular shape.

A bronze cauldron  that was found at Shipton on Cherwell in Oxfordshire which is now in the Ashmolean Museum, gives an idea of the riveting patterns on bronze vessels that may have inspired the ring stamp motif on the pots from Birchington and Margate.