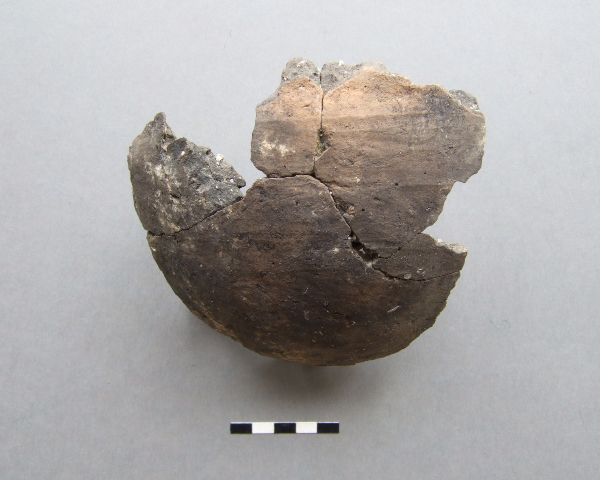 For today’s VM_365 image, on Day 187, we have another of the Neolithic vessels from Courtstairs, near Pegwell Bay, whose dating was supported by the  carbon dated cow skull shown for Day 186.  The picture shows a small, nearly complete round-based coarseware bowl, sadly without its rim.
The first pottery manufactured in the Neolithic period often had rounded bases, meaning that they would not stand on their own without being held upright or propped on some form of frame. It is likely that this property emerged from the round based collecting baskets which were the skeuomorphic models for the vessel shapes and the decoration that was added to them.
Humans developed tools to extend the capabilities of their limbs and organs, creating and experimenting with new objects and implements. We may, with hindsight, trace innovations as a progression of developments toward the most modern examples we know. However, when a new material is being explored, many uses and variations may be experimented with until the whole range pf possible functions and properties are developed.
Innovations eventually become embedded in our experience as the obvious and expected properties of a manufactured object, like a flat bottom in a pottery vessel, which may have appeared unlikely and unnecessary to the early innovators.