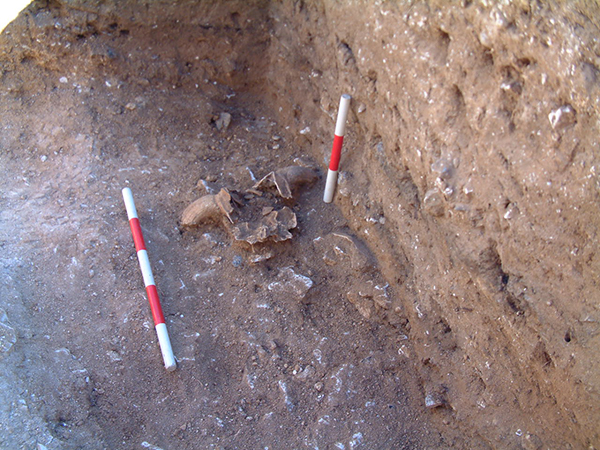 For our image on Day 186 of the VM_365 project and the first day of 2015, we have an object that has been significant to measuring the passage of time in one of the significant sites for the Neolithic archaeology of Thanet.

Among the deposits filling the deep pits hat made up the Neolithic causewayed enclosure at Pegwell were many fragments of bone, mainly representing large cattle species.  Large skull fragments. representing part of  the front of the head with the horn cores attached, were found in  two of the pits. In both cases the skull fragments were lying in the deposits that were close to the base and therefore early in the sequence. The one pictured today is lying on the front of the skull so the interior is exposed uppermost.

The animal remains have a tale to tell in themselves, presenting archaeologists with questions such as  what species were present, what parts of the animal are represented and how they have been incorporated into the deposits. However, another property of the organic animal bone is that it can be used to provide a fixed point in time by using it to obtain a radiocarbon date.

The position of the skull shown in the image was carefully recorded in the sequence of excavated deposits. If  a scientific method like carbon dating can give an absolute date  to one part of the sequence, it can be used to infer a similar date  for all the material associated with it.  The dating of the skull to 3636-3625 cal. BC has been used to confirm with independent data the suspected period when the distinctive Early Neolithic pottery recovered from the site and shown in VM_365 Day 172 was made. The absolute date given by the skull also helps to understand the dating of the large assemblage of flintwork, including the fine flint sickle shown on Day 173.

Dating a fixed point in the sequence also gives a relative date for the deposits that lie above it in the sequence, they must be some degree later than the date obtained. Ideally a number of dates needs to be obtained to strengthen the argument for dating the whole sequence but resources were limited on this site and it has only been possible to carry out one carbon dating so far. With limited resources the choice of material to date  becomes significant, making the cattle skull fragments that were deposited so low in the sequence of soils filling the pits very important to dating the site.

Using the possibilities of scientific dating methods to explore an object like the skull, archaeologists can examine the problems of a site from different angles, adding to our understanding of both the fixed and relative dates of our excavated sequences of deposits. This skull payed its part in one strategy to understand the absolute chronology of the development of a site, determining exactly when certain events occurred.