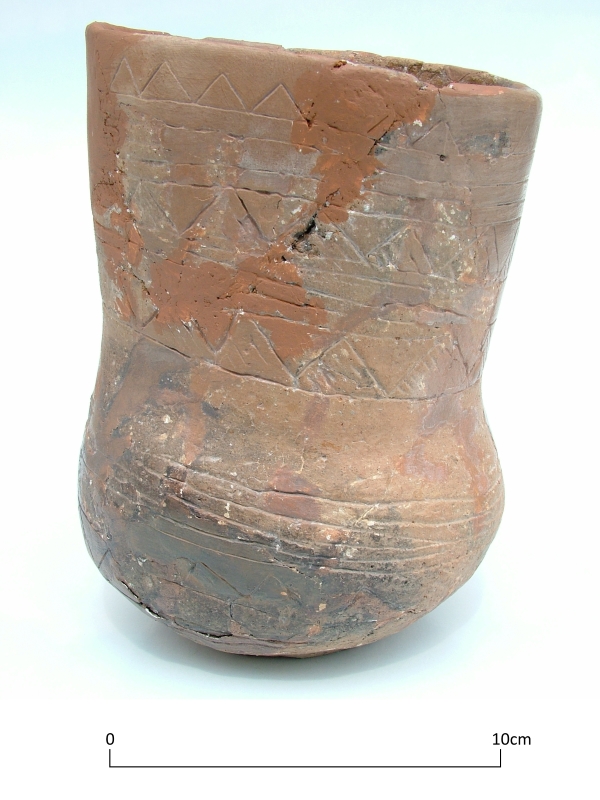 Today’s VM_365 image shows a Beaker vessel, which has been heavily restored, that accompanied the same burial as the  plano-convex flint knife and ‘V’ perforated jet button shown on Day  159 and Day 160.

The Beaker was found on its side on the base of the grave which was cut into the chalk geology. One large sherd from the neck and rim were found lying about 10 cm away from the main body, suggesting that the burial had been disturbed at some point in its history, possibly when a later Anglo Saxon burial may have been cut into the earlier burial.

A radiocarbon date from bone from the skeleton buried in  the grave dates the burial to 1680±50 BC.

The beaker is approximatley 10cm high with a base diameter of 6cm is made of light brown fabric. Grey patches of firing clouds on the body are indicative of an open firing. The core of the fabric  is grey, indicating that the short firing at a low temperature had not succeeded in burning out the natural organic inclusions in the clay.

The decoration on the vessel was made with a toothed comb, which has been carelessly used. On the upper part of the vessel the impressions of the comb’s teeth are so blurred that they seem to be incised. The decorative scheme consists of rows of chevrons, encircling combed lines and filled triangles. There is a basal zone of paired finger nail impressions

The vessel is unusual in that although the fabric is fine, the vessel is well fired and finished but the vessel is  asymmetrical and the decoration has been carelessly applied. The lop sided shape of the vessel is possibly a result of the clay being too wet, causing it to sag.