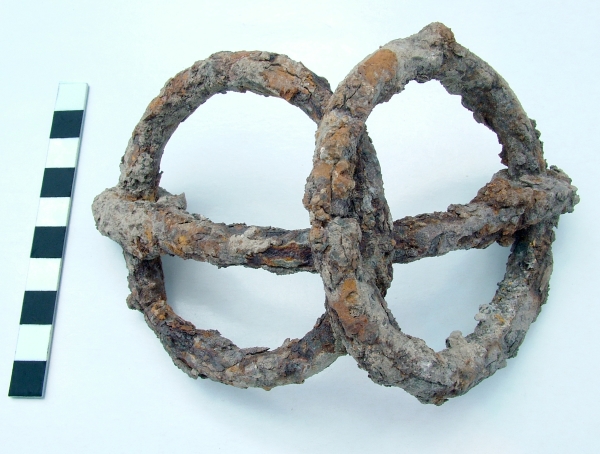 VM 365 Day 126, today’s image shows one of the two sets of what are thought to be Horse bridle bits, both consist of a pair of iron rings linked by loops at either end of a curved iron bar. They were found during the excavation of a pit at the Iron Age settlement at North Foreland, Broadstairs.

Both of the bit sets were found in the fills of the same pit dated by the associated pottery to the Late Iron Age around 150-50 BC. X-Ray images showed that each of the rings had a break in it, possibly to allow the bar to be attached to the rings which could then be hammered shut.

Bronze Bridle bits of this type, with a single plain bit, are more commonly found but these sets are unusual for Iron bits because they are made of a single curved piece of iron, rather than the more typical two or three piece iron examples.

Perhaps the two sets of bits were used together for a specialised purpose. It is possible they have a different function altogether and the similarity with horse bridle parts is a deceptive coincidence.