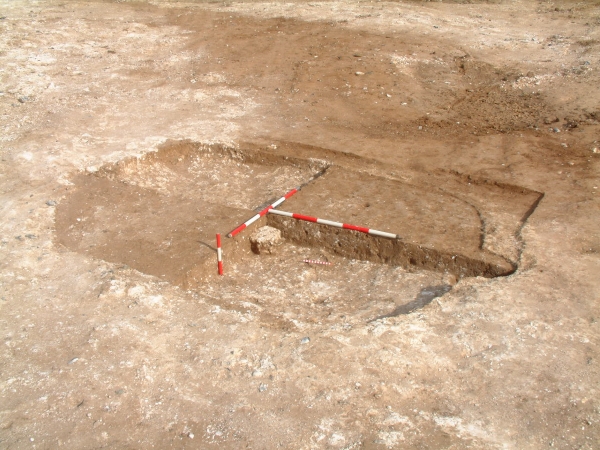 The image for VM_365 today shows the heavily eroded remains of an Anglo-Saxon structure, under excavation in 2005 at a site near the QEQM hospital, Margate .

Evidence for large early Anglo-Saxon cemeteries is abundant on Thanet, with remains having been excavated at Ozengell, Sarre, Valletta House, Half Mile Ride, Monkton, St Peters, Thorne Farm and Cliffsend. Aerial photographs have provided further evidence of  cemetery sites at Brooksend and Crispe Road, Birchington. However, contemporary settlement, indicating where the people buried in the cemeteries might have lived, is much less frequently encountered in Thanet.

Few, if any,  early Anglo-Saxon timber framed hall style buildings have been recognised in the area and the only early structures of this date recognised so far  on Thanet have been a type known to archaeologists as ‘Sunken Featured Building’or SFB’s for short. Where these structures have been identified elsewhere in the country, they have been dated to the post Roman ‘migration’ period of the 5th century, when the Anglo-Saxon people first arrived in Britain, with the form living on into later centuries.

The SFB is usually formed of a rectangular pit, with an arrangement of postholes around its edge in which upright posts had been placed. Reconstructions from sites such as West Stow in Suffolk suggest the rectangular pit formed a void or cellar over which a planked floor was laid and timber posts in various arrangements around the edge formed the supports for a superstructure above. Examples of SFB’s excavated at Dover suggest the sides of the void could also have been lined with timber planking. Reconstruction look something like a large garden shed with a timber lined pit under its floor.  The elements of the pit that remain to be discovered by archaeologists because they were cut deep into the ground and have survived the later erosion of the ground surfaces through ploughing, which destroyed much of the evidence for the surrounding structure.

The  remains of the SFB at Margate, shown in the picture, comprises a shallow rectangular cut measuring 3m by 2.5m, with two deep postholes in the centre of each of the short sides. A large fragment of  stone, part of a quern, that was found in the centre of the rectangular cut may have been a pad supporting an additional upright timber. The SFB was dated to the mid-6th to 7th century by fresh sherds of chaff tempered pottery from two or three vessels that were found in the backfill of the cut.

What were these buildings for?

Sunken Featured Buildings are most likely to have served several purposes, but they were probably not  domestic dwellings as was once suggested. The planked floor over a void has been interpreted as evidence that the SFB’s were used to house large weaving looms, the floor void allowing the loom weights to be suspended below a working platform and giving a better working area. The two upright postholes may have supported the frame of the loom. Shale loom weights and a bone pin beater have been excavated from an SFB at Ramsgate and an SFB found in Dover contained clay loom weights, preserved in their rows following a fire that destroyed the loom. Other examples have been found with hearths on the floors and it is possible that one of the many uses an SFB could be adapted to was a smoke houses for drying or preserving produce.