Following on from yesterday’s image of the gold thread  in grave 285 from Sarre, today’s image is of 29 glass beads found in grave 286 from the same Anglo Saxon cemetery site. 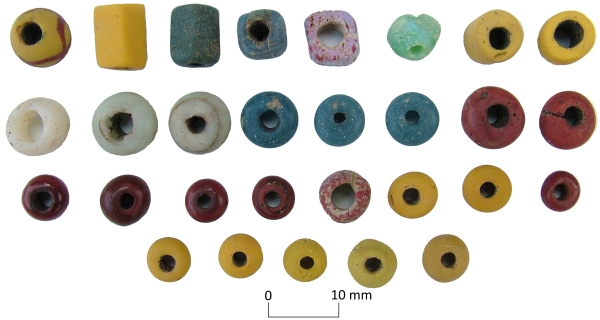 The grave was large  and well cut, most likely containing a female, based on the objects within it. Like grave 285 it had been disturbed in antiquity, skeletal material and objects  left behind by the robbers were scattered throughout the grave fill.

Among the objects found within the grave were nine amber beads and thirty one glass beads. Twenty nine of the glass beads are shown in the picture above, all are coloured glass. The one at the top left hand corner is a multi coloured or polychrome bead, almost globular in shape and of yellow glass with brown crossing trails. The other beads range in shape from pentagonal cylinders, 4 sided cylinders, short cylinders, discs and one is pear shaped.

Find out more about the site by reading:

Brent, J. 1863 . Account of the Societies Researches in the Saxon Cemetery at Sarr. Archaeologia Cantiana V, 305-22

For more on the clothing of the Anglo Saxon period read Penelope Walton Rogers’ excellently researched and illustrated book: