Today’s image is of a fragment of gold thread found in a mid to late sixth century grave at Sarre in 1990. The grave of an adult, probably a female, was disturbed in antiquity with the whole of the grave being emptied and backfilled. 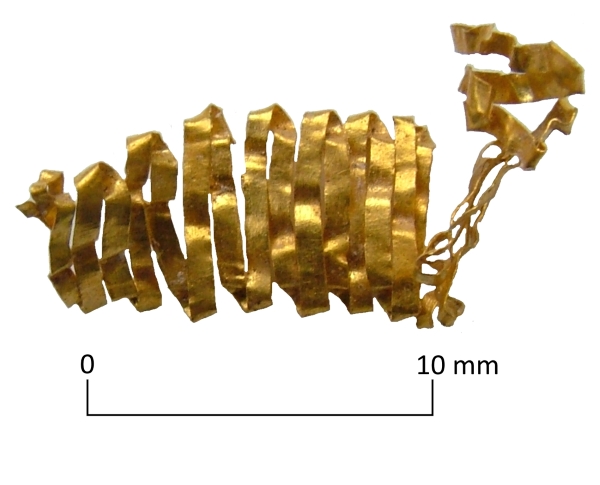 The  thread measures approximatley 20mm long and has been cut from a gold foil sheet that was 96.595% pure. The strip was folded and used in a brocaded pattern with textile threads, probably worn in a head band across the brow or decorating the edge of a coif or hood. The band was tablet woven and the pattern was inserted during weaving, not embroidered afterwards; the impressions of the textile threads can be clearly seen on the gold thread.
Similar gold threads have been found in Kentish graves of a similar date at Monkton, Bifrons, Lyminge and Faversham and are probably of continental origin.

Find out more about the site by reading:

Brent, J. 1863 . Account of the Societies Researches in the Saxon Cemetery at Sarr. Archaeologia Cantiana V, 305-22

For more on the clothing of the Anglo Saxon period read Penelope Walton Rogers’ excellently researched and illustrated book: