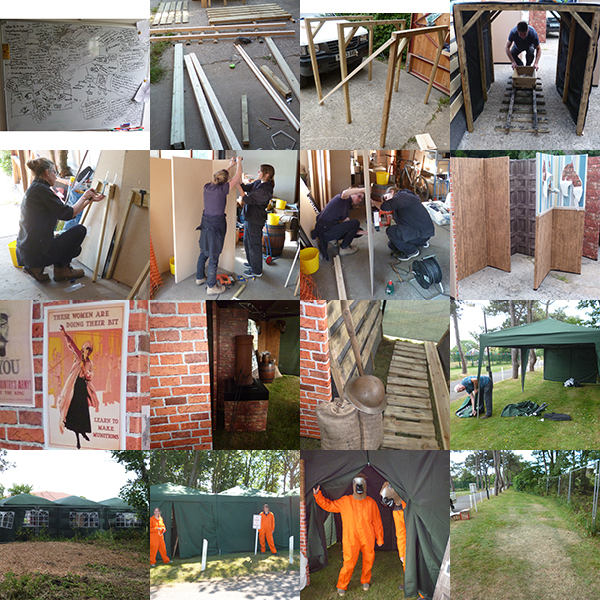 Today’s post for Day 355 of the VM_365 project features a series of images behind the scenes at our Friendships and Fallouts, Waterloo to World War One TimeTunnel, which has featured in the last four days of VM_365.

Day 351 took you through the first stage of the Tunnel, exploring Britain at the time of Waterloo, Day 352 took us to the Victorian period and the Crimean War. The industrial era and the age of Inventions in the 19th century featured on Day 353 and we entered World War One on Day 354.

Once again we had great fun at Bradstow School and we hope that we gave an interesting and educational experience to our travellers through time.

It all over now, and it isn’t even Christmas 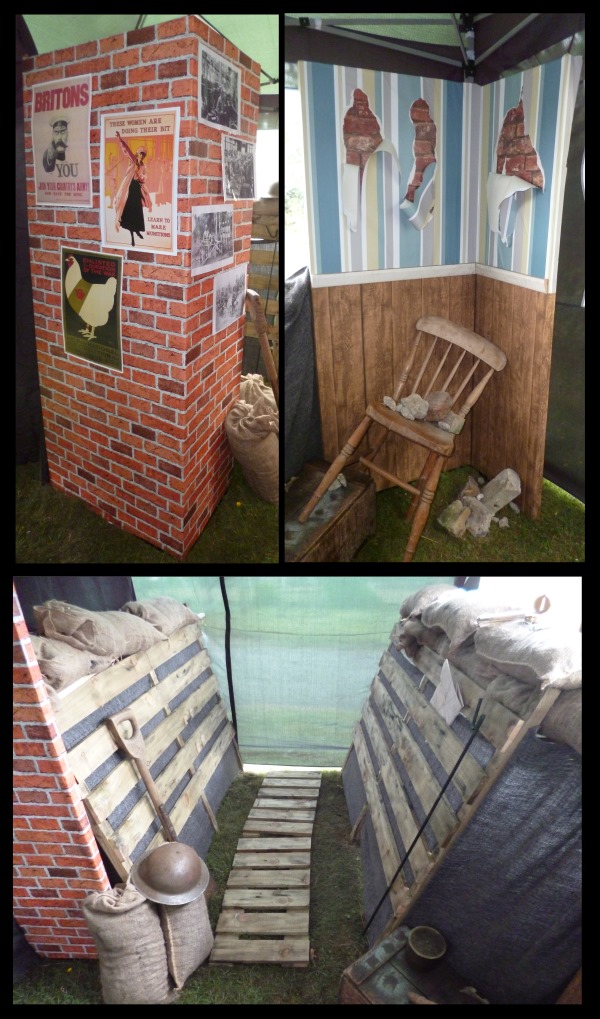 Today’s image for Day 354 show the final stages in our TimeTunnel journey from Waterloo to World War One that we have been delivering to local schools at Bradstow School, Broadstairs this week.

Day 351 covered the first stage in the TimeTunnel journey from the battle of Waterloo to what life was like in Britain in 1815; Day 352 described the second stage which took us from Queen Victoria to the Crimean War and Day 353 covered the Industrial Revolution and the growing threat from a unified of Germany.

Our final stage in the TimeTunnel allowed our visitors to find out what life was like in the First World War both at home and abroad. In the image show in the top left of the picture our factory wall holds a number of posters that were pasted up around towns and cities encouraging men to join up to fight in the war and women to contribute to the war effort by working in munitions factories. Even chickens were enlisted into the war effort to provide eggs for wounded soldiers! On the opposite face of the wall pictures of women working in munitions factories gave our visitors an idea of what it was like for women at home and a series of pictures of troops from different parts of the empire, in particular the South African 1st Infantry Brigade and Indian Bicycle Troops who both fought at the Somme emphasise that it was not just European soldiers fighting and dying in this war.

That the war was now no longer restricted to the battle field but could also threaten the lives of people at home through bombing from both aeroplane and Zeppelins, which were relatively recent inventions, was highlighted in the next vignette of a bomb damaged house (image top right).  Here our visitors were told of the Zeppelin attacks on the local area including Bradstow School itself and that nearby Ramsgate was the most bombed seaside town in World War 1.

Our final vignette showed our visitors what life might have been like living in the trenches. Food was most likely taken from a tin and probably consisted of Bully Beef or Irish Stew, other items also came in tins including tobacco, like the vintage ones we had on display alongside an example of a corned beef tin, similar to the ones used in the trenches.

As we entered the recreation of a World War 1 trench we explained how the camaraderie of soldiers under stressful conditions of battle would have forged some of the most important friendships among service men. To give a sense of the uncertainty of their lives our young visitors were invited to leave the trench at the sound of the officers whistle, leaving the TimeTunnel to return to their lives in the present. 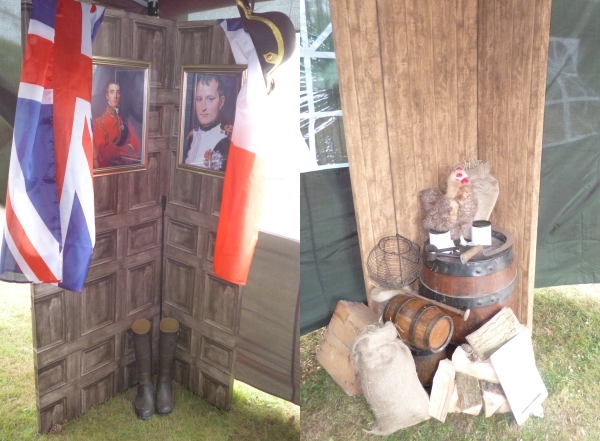 The VM_365 post for Day 251 is of the first two stages in our TimeTunnel, built for four days of school activities at Bradstow School in Broadstairs.

In the Tunnel we trace the changes in British society from the century following the end of the Napoleonic Wars at the Battle of Waterloo in 1815 to the early years of World War 1. The journey focuses on friendships and fallouts between nations, population and families.

In the first two stages of the trip through time we have two vignettes where we explain the ideals and the effects of the French revolution and the reaction of the other nations of Europe, which culminated in the confrontation with Napoleon’s Army at Waterloo. The local connections with Wellington’s Army and Thanet’s ports are part of the story told at this point in time and a lighter note is introduced deciding whether the Duke of Wellington lent his name to a form of waterproof boot or to informal running shoes. Anyone heard of the Duke of Trainers?

The second station explores the way of life of most of the people of Britain in the early 19th century,  at the time of the Battle of Waterloo. The majority of the population lived in rural communities or small towns and industry in our region was concentrated on manufacturing of supplies for the Navy such as the production of Gunpowder in the Faversham area. We explore methods for preserving and transporting country produce  in barrels and casks and the innovation of sealing food in cans which transformed the preservation and transport of food in the 19th and early 20th centuries. Canning started as an experiment with the Napoleonic French Army and was taken up with enthusiasm by the British Army. The theme of canned food is taken up again later in the TimeTunnel in the trenches of the Western front.  Bully Beef for Tommy.

The final theme in this pre-industrial era is to point out that the principal sources of power remained that of the muscle power of humans and animals, especially horses. Now is it possible that we were able to get two fully grown horses into the Time Tunnel? Follow the journal posts this week to find out… 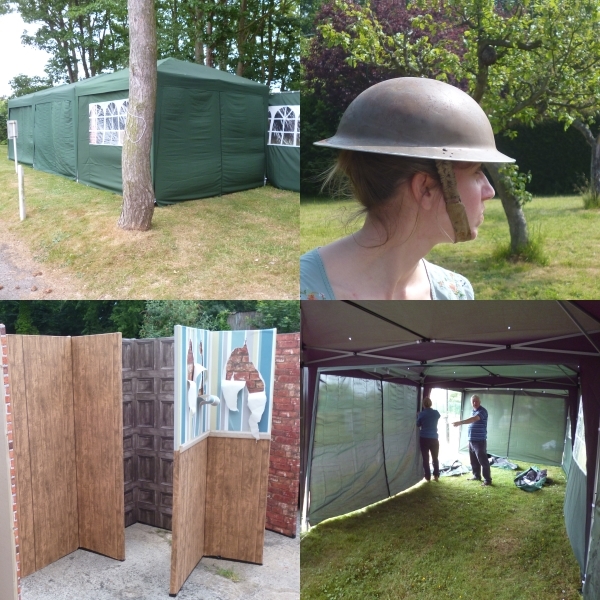 Today’s image for Day 349 of the VM_365 project was taken as the Trust set up a Virtual Museum TimeTunnel, ready for four days of workshops for schools to be hosted at Bradstow School in Broadstairs from the 15th to the 18th of June 2015.

The Heritage Lottery funded event ‘Friendships and Fallouts, from Waterloo to World War One’ will see as many as 500 children pass through the workshops and activities in the grounds of the school. The event commemorates both the bicentenery of the battle of Waterloo and the continued marking of the hundredth anniversary of the First World War.

The TimeTunnel will take children on a journey through the changes that took place in British life in the hundred years from the defeat of Napoleon to the outbreak of a conflict that reached every part of the world.  The TimeTunnel visits  a series of scenes that explore the changes from industrialisation to the great inventions of the early 20th century which created the means to make global conflict possible.  As the journey through the tunnel takes place, the friendships between nations, families, working people and soldiers are investigated and the fallouts that provoked conflict between people and nations are revealed. The journey through the TimeTunnel ends in the battlefields of the Western Front with the fate of all the travellers left undecided.

Journal articles over the next four days will reveal the secrets of the VM TimeTunnel and follow the progress of the event. 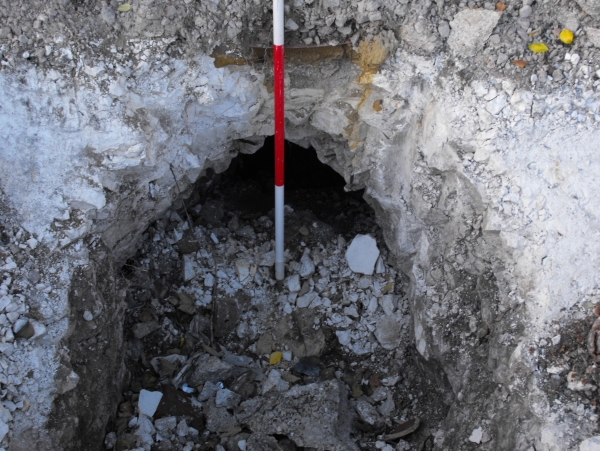 This intriguing picture shows the entrance to a First World War air raid shelter which was exposed in 2011 when a new supermarket at Chatham Street, Ramsgate was being constructed.

Bombing raids from Zeppelins and cross channel shelling had affected Thanet, but it wasn’t until 1917 that the Island was targeted by German Gotha bombers. Many of the air raid shelters on the Isle were dug into the chalk bedrock at this time.

The Chatham Street shelter was surveyed by Rod LeGear, assisted by other members of Kent Underground Research Group in January 2012. The survey, shown below, revealed that the tunnel included benches cut into the chalk and had been lit by simple candles some still remaining as stubs in niches in the wall.

An Ice factory occupied the site from around 1907 and this shelter was probably dug as a refuge for its employees in 1917 in response to the Gotha bombing raids. 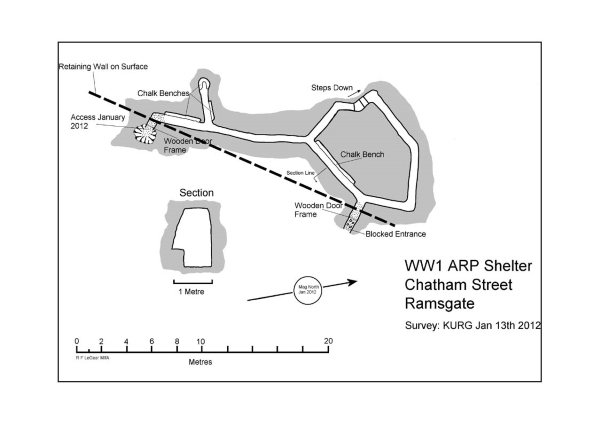 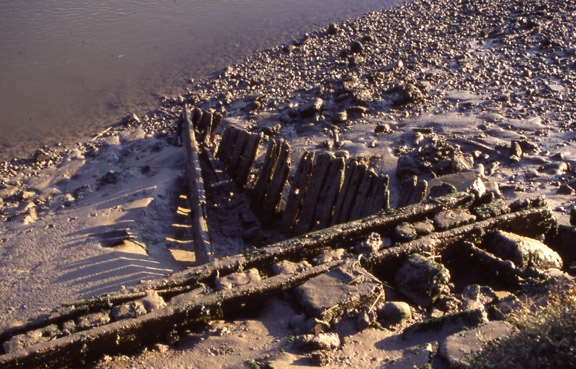 To commemorate the 100th anniversary of the start of the First World War, today’s image is of the timber structures at recorded at Stonar Cut, Richborough in 2005.

One of the least known structures of World War I is the Stonar Port, constructed between 1916-1918 to supply the Front Line in France and Belgium using the French canal network. Today only the upright timbers of the once extensive wharves survive to be seen in the water line along the River Stour.

Along with the structures that were added in the Second World War, this port  and the many thousands of people who served their country in the two wars are not well known outside the military history field.

Find out more about our survey carried out in 2005 in the Virtual Museum. 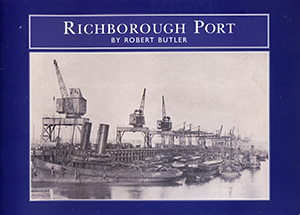 We have a very limited amount of these publications for sale. If you wish to purchase a copy for £5.00 plus £2.00 p&p (UK only) leave a comment and we will get back to you to arrange payment.

Update: You can now order this book from our Publications page